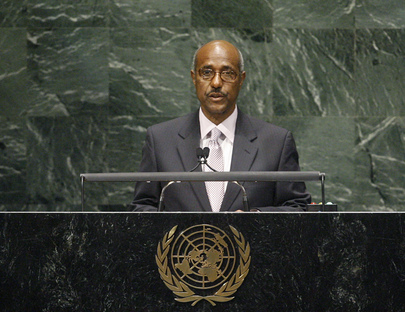 SEYOUM MESFIN, Minister for Foreign Affairs of Ethiopia, reviewed the salient aspects of his country’s political and economic transformation, most notably its democratization process, which was now in its second decade. The process had been “bumpy and fraught with difficulties”, but despite its seemingly insurmountable difficulties, Ethiopia’s motto of perseverance had paid off. His country’s single-minded focus on building institutions of democracy, good governance and rule of law was the crux of its efforts towards building a stable political system. Nevertheless, the essence of all its endeavours was the devolution of power to its people, he said, and stressed a firm belief that democracy is “not an option but a means of survival for the country”, and was an irreversible process that had taken “deep roots” at the state level and society at large.

Democracy, however, was not an end to itself, but a means to bring about a better life for the people, he said. The country’s development strategy envisaged democracy as the cornerstone of political and economic governance. To that end, development in Ethiopia was in full swing; it had registered an annual average of double-digit economic growth over the past seven years. Its successful achievements during that time helped to formulate its ambitious five-year economic “Growth and Transformation Plan”, which would lay the foundation for nation building, and remove the “bottlenecks” that prevented its progress towards reaching the Millennium Goals. First and foremost, the plan would help make “poverty history in our country”, he said, and would mark the end of an era of food insecurity and dependency on aid, for which he expressed his gratitude to the international community. Despite progress in sub-Saharan Africa, the global and economic crisis caused many African countries to lag behind other regions of the world in reaching its Goals. Therefore, progress toward 2015 would require a commitment and accountability from the international community, he said.

Turning to climate change, he hoped that the upcoming Cancun meeting would produce a legally binding commitment to allocate change. Regarding renewable energy, Ethiopia committed to a zero carbon emission by 2025, and since 2008, had annually planted over a billion trees throughout the country. Energy development was key to fighting poverty, and over 1.4 billion people remained without it. Therefore, electrification of rural areas was a top priority, with a target of providing energy to 75 per cent of the population by 2015. In five years, the country would have 10,000 megawatts of hydropower with parallel development of its geothermal, biofuel, wind and solar power potential. Nevertheless, progress in those key areas required external assistance.

He said Ethiopia remained on the forefront of maintaining global peace and security, being an active participant in peacekeeping since the 1950s. Nevertheless, the threat of extremism continued unabated in Somalia, and there would be little progress without the highest level of commitment within the Transitional Federal Institutions (TFI) of Somalia. In a recent meeting, the Intergovernmental Authority on Development (IGAD) Council of Ministers called upon them to work together to address the challenges. Furthermore, it reaffirmed the Djibouti Process as the sole basis for peace and reconciliation in Somalia, and expressed regret that Eritrea continued to play the role of a “spoiler” and the main conduit of arms to the terrorist groups. With regard to Sudan, success there would be a significant success for Africa as a whole and failure would be a serious catastrophe. In closing, he reiterated the “destructive role” that the Government of Eritrea played since its independence, and urged the Security Council to take the necessary steps to compel the country to live up to expectations under resolution 1907 (2009). As a founding Member of the United Nations, Ethiopia underscored the importance for its reform in order to ensure its vitality. Of particular importance was the ongoing cooperation and consultation between the Security Council and the African Union Peace and Security Council. He said, “We should continue with this cooperation and Ethiopia will do whatever is necessary in that regard.”

Speaking in exercise of the right of reply, the representative of Ethiopia , responding to statements made earlier by Eritrea, said that since the 1990s, Eritrea had invaded several of its neighbours. That regime had unleashed unprovoked aggression against Ethiopia, but its army had been routed. It was now campaigning against Ethiopia, claiming that Ethiopia was the aggressor even though it was Eritrea that had violated the Charter by invading Ethiopia. Ethiopia had been willing to engage with Eritrea in demarcating the boundary between the two countries.

He said that Ethiopia was ready to sit and discuss all issues with Eritrea, but Eritrea had not agreed to dialogue. The claim that Ethiopia was occupying Eritrea’s territory was a figment of that country’s imagination. In cases of dispute, the United Nations had no power to arbitrate without the specific mandate of the concerned parties. Eritrea was only trying to divert attention from its destructive activities. The Boundary Commission that had looked into the dispute had made significant points to the effect that, until such time as the boundary between the two countries was finally demarcated, the boundary which Ethiopia had accepted remained as the only valid one. The most important task that remained was to demarcate the boundary on the ground in order to ensure durable peace.

Also speaking in exercise of the right of reply, the representative of Iran said the United Arab Emirates had raised unacceptable claims about the three islands in the Gulf. Rejected those remarks, he emphasized that the islands in the Gulf were part of Iran’s territory. Iran stressed its determination to continue as good neighbours. All the actions and measures taken by Iranian authorities were based on the sovereign rights of the Islamic Republic of Iran.

The representative of Ethiopia stated that his country was part of the effort to help stabilize Africa, and had a long history in that area.  The Security Council sanctions had been clear, and as such, Eritrea could not use “its own excuses, real or imagined” to explain its acts, such as the support of extremists in Somalia and campaigning to appear “like the underdog”.  Continuing, he urged that all stay the course set out in Security Council resolution 1907 (2009).  Ethiopia also agreed with the Security Council’s belief that the primary responsibility for settlement “lies with the two parties”, and that a peaceful manner and dialogue were the only methods for resolution.

Taking the floor again, the representative of Ethiopia said that both Ethiopia and Eritrea had replied and that both were throwing out accusations, but to no avail.  For the purpose of saving time, with regard to Ethiopia, he noted the records of the Secretary-General’s recent summit on Somalia, which should be consulted.  He said that sanctions had not been imposed on Ethiopia, but on Eritrea, because of the African Union’s specific request to that end.  He said that he would be surprised if the African Union “has gotten it all wrong and Eritrea has gotten it right.”  Regarding the demarcation, the representative of Ethiopia said he did not have anything to add, and the only way forward was dialogue.