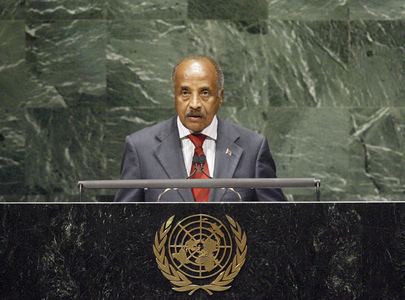 OSMAN SALEH, Minister for Foreign Affairs of Eritrea, said that, while prospects for a rapid reform of the United Nations system appeared to be dim, Member States must not give up, and instead should continue to speak out and work tirelessly for an Organization that was fit for the twenty-first century, as well as for a more just and equitable world. At the same time, Members needed to focus on their own nations and regions to ensure peaceful, stable environments and dignified lives for their peoples.

He said that Eritrea sought, through robust and constructive engagement, to make its modest contribution to global peace, security, justice and equity, and to the protection and enhancement of the environment in the face of changes that threatened the very survival of humanity. Regionally, the Eritrean Government’s efforts were directed at securing peace, stability, development and cooperation in the wider Horn of Africa and the Red Sea region. Reviewing the specific situations in Sudan, Somalia as well as Eritrea’s own relations with Ethiopia respectively, he said his country was working closely with the Sudanese parties, as well as with regional and international actors, as that country entered a critical period in its history. He believed that the international community as a whole needed to wholeheartedly support the parties to the Comprehensive Peace Agreement as the country approached the historic referendum set for January 2011, and beyond.

On Somalia, he said it was Eritrea’s view that there could be no military solution to the problems in that country, given the bitter experience and spiralling violence of the past two decades. While that was a conviction that by now was widely shared in the international community, serious doubts continued to be raised as to whether the alternative — a Somali-owned and Somali-driven inclusive political process — was possible and practicable. In that regard, he urged the United Nations and all those concerned with peace and security in Somalia to earnestly engage all Somalis and to give the political process the serious and sustained attention it deserved.

Closer to home, he charged that while the United Nations grappled with Sudan and Somalia, the Organization continued to ignore the grave consequences of Ethiopia’s continued occupation of Eritrean territory, eight years after the ruling of the Eritrea-Ethiopia Boundary Commission, and three years after the Commission had ended its work by depositing in the United Nations the demarcated boundary between the two countries. Ethiopia’s illegal occupation and the United Nations silence, which meant the continuation of the conflict, was exacting a heavy price on the peoples of both countries and complicating the regional situation. He went on to say that Eritrea’s constructive engagement on regional and international matters stemmed from its firm conviction that a conducive, external environment was essential for nation-building.

The representative of ERITREA categorically rejected all statements made by Ethiopia.  The Boundary Commission had put the border dispute issue to rest.  Ethiopia had to face up to its obligations.  “There was no need to go around the bush,” the representative said.   Eritrea had fully cooperated with the Commission and that body’s decision was binding.  While Eritrea supported the peaceful settlement of disputes, Ethiopia had shown its disdain for international law.

The representative of Eritrea stated that his country had no problems with its neighbours and had successfully resolved all issues peacefully and legally without exception, including such issues regarding Ethiopia.  He said Ethiopia could not hide behind the Security Council’s resolution regarding Somalia and use that text “for its own hidden agenda”.
He called for Ethiopia to be held accountable for the financial support it received, which was in turn supplied to Somalia to support of the insurgency.  Furthermore he called for a “total investigation” of Ethiopia’s invasion of Somalia which had “created the largest humanitarian crisis” and destabilization, as well as the loss of some 20,000 lives.  Ethiopia believed in political solutions and inclusive peace processes both within and outside Government bodies.  All concerned parties in the region should come to the negotiation table, he said, adding that the peace process should be Somali-owned and driven.

The representative of Eritrea said that the key to the country’s dispute with Ethiopia was the withdrawal of Ethiopian soldiers from Eritrean territories.  He noted that the Ethiopia-Eritrea Boundary Commission had demarcated the border, and that Ethiopia had to respect the rule of law.  Ethiopia had committed a shameful act, which could not be swept under the carpet with unfounded allegations.  Ethiopia had to face up to its treaty obligations.

He further wished to draw the Assembly’s attention to the fact that Ethiopia had been the only constant factor throughout the crisis in Somalia.  Ethiopia had “a hidden agenda” and its involvement in Somalia was dangerous to the Somalis and rest of region, he said.  The international community must assess the situation and seek a better solution to allow Somalis to take charge of their political process.