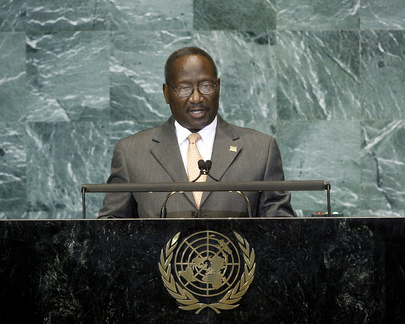 NICHOLAS LIVERPOOL, President of Dominica, said scientific and technological innovation had made the world a truly global village characterized by continuing connectivity and unimagined possibilities for facilitating global development.  Those technologies, integrating as they did even the smallest and traditionally most distant countries into the day-to-day activities of the world community, had the potential to combat hunger, eradicate poverty, generate employment, and to elevate the standard of living of people throughout the world, without compromising the integrity of the ecosystem and planet Earth.

However, realizing the full potential of those opportunities meant that the nations of the world needed to muster the courage to pursue with determination reforms in international and multilateral institutions like the United Nations.  That would ensure equality of treatment, and bring the benefits of development, to those countries which, in consequence of small size were often the least endowed, and most vulnerable in today’s world community, he stated.  On the Millennium Development Goals, he observed that, while results to date had been encouraging, there still remained a number of unresolved global issues, which had stymied the efforts to attain those targets.  He suggested, therefore, a reconfiguration and acceleration of efforts by all Member States during the next five years before the target date of 2015.

Turning his attention to the phenomenon of climate change, which was well documented, he said it was the experience of Caribbean and other small island developing States that the increasing intensity of hurricanes, droughts, floods, destruction to coastal areas and rising sea levels had had severe impacts on their agriculture, tourism and physical infrastructure.  As a result, more money was being allocated to the increasingly high cost of adaptation and mitigation measures, undercutting funds that would have otherwise been used for social and economic development.  Climate change, therefore, had become a major threat to the ability of most developing countries to achieve the Millennium Goals.

Making the case for small island developing States, he pointed out that for nearly two decades, the United Nations had recognized the special economic, social and environmental vulnerabilities of those States.  Since the 2005 Mauritius meeting, their situation had become even more precarious, as the impacts of the world food and fuel crises in 2007, and the financial and economic crisis in 2008 had clearly demonstrated the open and vulnerable nature of small island economies.  In that regard, it was regrettable that to date no consensus had been reached on the best way to deal with what he considered a “clear and present danger” to the planet.  “The failure at Copenhagen should be further motivation for all countries to work assiduously towards an agreement in Mexico,” he stated.

On Peace and security, he called for a world free of nuclear weapons and joined calls for total disarmament.  As for small arms and light weapons, he said Dominica was concerned over the increase in that illicit trade in the Caribbean region.  He was far from convinced that larger nations understood the extent of the inability of smaller nations like his own – virtually bridges between the producers and consumers of narcotic substances - to cope with that new “horror”.  Indeed, the continued demand in the North for drugs produced in the South, and the growth of the related trade in small arms, had placed countries like Dominica in the crossfire of those illicit activities.

Turning to efforts to rebuild Haiti in the wake of January’s devastating earthquake, he called on Member States to make good their promises so as to ensure that the rebuilding process could continue and to avoid further deterioration of the political, social and economic situation of that country.  Concluding, he said Dominica strongly supported the principle that it was the United Nations – to which all countries turned in times of crises – which had to play the fundamental role in the surveillance of all developments which affected the planet; and in that regard reaffirmed his commitment to the central role the world body had to play in global governance.