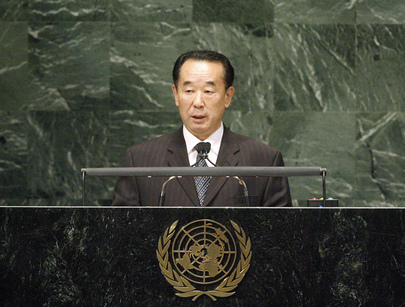 PAK KIL YON, Vice-Minister of Foreign Affairs of the Democratic People’s Republic of Korea, stated the most important meaning of the United Nations foundation was the principle of sovereign equality. However, that principle was now one of the ongoing challenges to fulfilling the obligations under its Charter. Indeed, power politics abounded, and sovereign equality and international law were “trampled down into shatters by arbitrariness and high-handedness of individual powers”. Denying the rights of countries to choose their own system constituted a violation of human rights. He noted that his country was victimized, and, in light of that situation, he called for United Nations reform, urging restructuring of the Security Council and the full representation of non-aligned and other developing countries on it.

Regarding security, he turned to the situation on the Korean peninsula and its effect on world peace. Since its inception, the United Nations put the “Korean issue” on its agenda, and it had been a priority concern for more than 30 years. Part of that work had led to the adoption of resolution 3390 (1975), which called for the dissolution of the “UN Command” in South Korea, the withdrawal of all foreign forces, and replacement of the Armistice Agreement with a peace agreement. Thirty-five years elapsed, and the Korean peninsula was still in a state of armistice, which meant neither war nor peace. While the resolution was yet to be implemented, the sovereignty and the efforts of his country for peaceful development were constantly threatened. The most recent example was the Cheonan incident.

The situation created sometime ago in Northeast Asia, including the Korean peninsula, proved once again the United States was a “disruptor of peace” As long as that country’s nuclear aircraft carriers sailed around the seas of his country, the Democratic People’s Republic of Korea’s nuclear deterrent could never be abandoned. Had it not been for the powerful war deterrent built by the great leader, General Kim Jong Il, the Korean peninsula would have already been turned into “a war field”. This year, his country proposed to the parties to the Armistice Agreement to begin talks to replace it with a peace agreement, which would represent the most effective confidence building measure for removing distrust, and guarantee the denuclearization of the Korean peninsula. His country opposed nuclear war, nuclear arms race and proliferation. Indeed, denuclearization was the policy goal maintained by his Government for peace and security in Northeast Asia. As already clarified, he noted that: “Our nuclear weapons are not a means to attack or threaten others, but a self-defensive deterrent.”

He went on to say that it was unfortunate that the current authorities in the Republic of Korea rejected his own Government’s reunification program and drove the inter-Korean relations into a rupture by bringing forward the so-called “three-phase unification proposal”, which was anti-reunification and confrontational. His delegation totally rejected the provocative statement delivered by the Republic of Korea’s delegation on 25 September referring to the Cheonan incident again, distorting the 9 July Presidential statement of the Security Council. The truth of the incident was still “under cover”, and Republic of Korea officials had refused to send a field inspection group for scientific verification to reveal the truth. The Security Council encouraged the settlement of all outstanding issues by peaceful means. The Republic of Korea was advised not to create tension by waging war exercises with outside forces and should embark on North-South dialogue immediately.