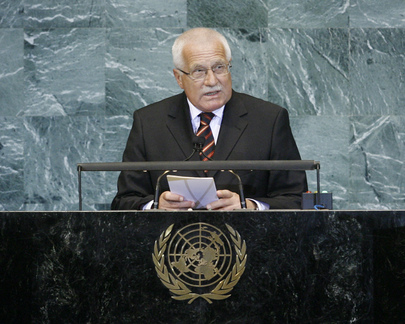 VÁCLAV KLAUS, President of the Czech Republic, said that because the world had changed so much since the United Nations was founded, the structure of the United Nations needed to be different, as well.  That was particularly true of the Security Council, which needed to be reformed to reflect the geo-political, economic and demographic reality of the twenty-first century.  It was frustrating that discussions about reform had been going on for the past 16 years without results, and the time for concrete outcomes had arrived.

However, not everything needed to be changed.  For example, the organization did not need to search for a new mission.  Rather, its goals should remain the same, namely to maintain international peace and security; to develop friendly relations among nations; and to achieve international cooperation in solving international problems.  It must not divert from these principles, but should remain an intergovernmental platform, based on the plurality of views of its Member States.

Regarding the world economic and financial crisis, he said that the international community was moving in the wrong direction.  Anti-crisis measures that had been proposed and partly implemented followed the assumption that the crisis was a failure of markets and called for protectionism and regulatory governmental interventions.  The solution did not lie in more bureaucracy, or in creating new governmental and supranational agencies, or in aiming at global governance of the world economy.  Rather, international organizations, including the United Nations, should reduce their expenditures, make their administrations thinner and leave the solutions to the Governments of the Member States, which were directly accountable to the citizens of their countries.

He said that developing countries should not be prevented from achieving economic growth.  They needed access to foreign markets and free trade, and must not be forced into agreements about ever more ambitious targets in the fight against climate change.  The United Nations should not have an all-encompassing agenda, and should not turn away from political topics towards “scientific” ones.  The United Nations was not there to determine what science was, but to engage its Member States in a rational, reasoned debate about political issues.  The most harmful political debate in the last couple of years had been about climate change.

In April of this year, the Czech Republic had hosted an important event on nuclear non-proliferation, during which the United States and the Russian Federation had signed a treaty on further reduction and limitation of strategic offensive arms.  It was an important step forward.  At the same time, while the Czech Republic did not dispute the right for any country to use atomic energy for peaceful purposes, it must be done in a responsible way.  Countries must not ignore agreed and respected international standards to threaten stability in their regions and increase the risk of proliferation.

He closed by saying that instead of becoming a source of funds for various and sometimes dubious non-governmental organization, which without accountability or control sought to profit from United Nations activities, the organization should strive to be an efficient body where States and their people were represented.