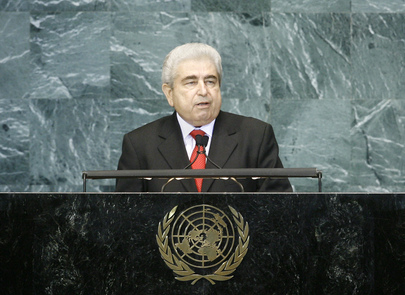 Dimitris Christofias, President of Cyprus, emphasized the importance of the United Nations and other multilateral organizations and expressed his hope for the creation of an independent Palestinian state, coexisting side by side with the State of Israel. In this context, Cyprus and Greece had proposed the creation of a humanitarian sea corridor for the people of Gaza. He also noted the country’s fiftieth anniversary as an independent republic and full Member of the United Nations, as well as its membership with both the Non-Aligned Movement and the European Union.

In the political field, he stated, the first years of Cyprus’ independence were marked by difficulties and differences that had been exacerbated by foreign interference. One of the outcomes of that interference was the illegal Turkish invasion of July-August 1974 that still occupied 37 per cent of Cyprus. “The people of Cyprus have suffered enough”, he stated. It was time to overcome the problems and to achieve reconciliation between the two communities.

He expressed the nation’s appreciation to the Secretary-General, the Security Council and the Organization as a whole, noting in particular the Security Council’s endorsement of the country, through its resolutions, as a bicommunal, bizonal federation with political equality. He further stated that he had been actively engaged with the leadership of the Turkish Cypriot community within the framework of the Good Offices mission of the Secretary-General on constitutional and internal issues of concern.

It was agreed, he continued, that there would be no “artificial deadlines or outside interventions in the form of arbitration or submission of ready-made solutions”. A package had been submitted within the framework consisting of three proposals: the linking of negotiations on chapters of property, territorial adjustments and settlers; the holding of an international conference when agreement was close on internal issues; and initiatives targeting Famagusta. If accepted, that proposal would have benefits for all sides. Unfortunately, he said, the new Turkish Cypriot leader and the Turkish leadership had rejected these proposals.

“From this podium”, he emphasized: “I would like to propose that the National Guard and the Turkish Army cancel again their autumn annual military exercises. Turkey’s leadership has been assuring the international community that it wants a solution of the problem by the end of 2010. We are still waiting for their words to be transformed into action.”