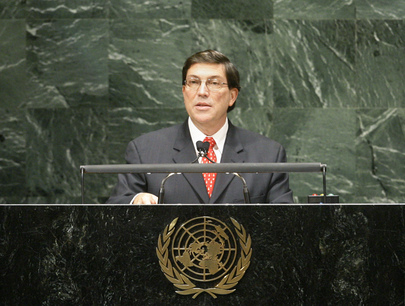 BRUNO RODRÍGUEZ PARRILLA, Minister for Foreign Affairs of Cuba, said, while the General Assembly deliberated, strong and influential powers in the United States and Israel were preparing a military attack on Iran. At the same time, the Security Council had moved to adopt sanctions against that country, which together with unilateral sanctions illegally imposed by a group of States, sought to suffocate the Iranian economy. The recent biased report of the Director-General of the IAEA only increased tension and provided a pretext for escalated hostilities. Should such aggression materialize, it would be a crime against the Iranian people and would constitute an attack on international peace and law and detonate a nuclear conflict. Its impacts on the environment and world stability would be incalculable.

He wondered who could guarantee the contrary and on what basis. How could it be argued that the current path would remove the threat of conflagration in the Middle East? In the Security Council, the main country responsible for the crisis had imposed its own designs. Wars against Iraq and Afghanistan showed that no one Government could be entrusted to decide when all diplomatic steps to prevent war had been exhausted. For its part, the United Nations should be radically reformed, the Assembly’s “faculties” be reinstated and the Security Council be founded anew. The Secretary-General and all high representatives of international organizations, including the Agency, should respect States’ will. The danger posed by nuclear weapons would be solved only with their total elimination. The existence of a “club of the privileged” and countries of the South being denied the right to peaceful nuclear energy use should cease, he said, urging the United States, the main nuclear Power, to stop opposing the negotiation of legally binding agreements to rid the world of such threats. The Non-Aligned Movement’s proposal for a plan of action to create nuclear-weapon-free zones had gone unheeded. Such a zone must be achieved in the Middle East, which would remove the threat of conflict in that region.

In other areas, floods, droughts and extreme temperatures were reminders of climate risks, and he cautioned against narrow political agendas that could prevent the adoption of a binding agreement at the upcoming Climate Change Convention conference. Developed countries should accept more ambitious goals for cutting emissions. Moreover, it would be irresponsible to ignore the claims of non-governmental organizations that had met in Cochabamba five months ago to defend Mother Earth. Urging solidarity with Venezuela, he said victory in parliamentary elections had shown support for that country’s President. He also stressed that pledges for international assistance to Haiti must be realized.

As for relations with the United States, he said that country understood that Cuba was willing to live in a climate of peace and sovereign equality. Ties based on international law would enable those parties to solve their differences. However, the agenda for dialogue, presented to the United States on 14 July 2009, had not yet received a response. That Government would not rectify one of the most universally rejected elements of its policies towards Cuba — its commercial and financial blockade — which had been the object of 18 resolutions that called for its elimination. Financial transactions in United States dollars linked to Cuba were confiscated and banks undertaking them were penalized. Also, there was continuous violation of Cuba’s radio-electric spectrum, while millions in federal funds had been used to destabilize Cuba. A military base in Guantanamo had become a base of torture, while the United States migration policy encouraged illegal immigration. Cuba’s inclusion on the “spurious” list of nations that sponsored terrorism was deeply immoral. He called for the five anti-terrorist Cubans to be freed, which would be a sign of the United States’ will to combat terrorism in its hemisphere.

A representative of CUBA said Sweden felt it could reserve the right to judge other countries, particularly the poor and underdeveloped countries of the global South, with regard to human rights.  Sweden’s representative had spoken “like a judge delivering his verdict, and then left”, despite the fact that he had been asked to stay in order to hear Cuba’s right of reply.  With what right or mortality could Sweden judge others, he asked?  Who said he could give Cubans lessons when it came to human rights, a topic which Cubans were deeply proud of?

As the international community already knew, Sweden had in the past authorized secret, illegal Central Intelligence Agency (CIA) flights over its territory.  That action, a “dark episode” for Sweden, had yet to be clarified.  When asked about the situation, Sweden had replied that it had been investigating it for several years.  Cuba, however, believed Sweden was trying to hide the issue.  Briefly drawing attention the issues of prostitution and sexual violence against women and girls in Sweden, he asked for an answer as to when the investigation on the secret, illegal CIA flights would be concluded.  Furthermore, when would Sweden condemn the double standard and political manipulation within such a noble topic as human rights?  How long would it continue to deceive the Assembly, he asked?