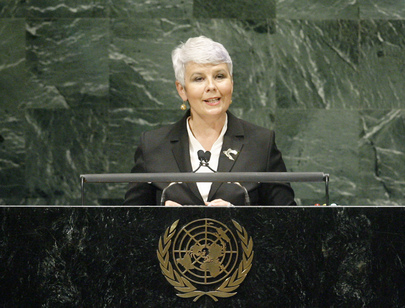 JADRANKA KOSOR, Prime Minister of Croatia, opened by saying that the accelerated development of the contemporary world, and especially the challenges and threats to which it was exposed, required concerted action, joint responsibility and new solidarity. In that vein, the subject proposed as the theme of the Assembly’s sixty-fifth session — reaffirming global governance and the role of the United Nations — should remind all delegations the role of the Assembly in forming broad, coordinated and inclusive responses to shared challenges.

Specifically, she referred to the Millennium Development Goals and their implementation, and noted that they were additionally important because of their strong link with priorities related to the process of Croatia’s accession to the European Union. She noted Croatia’s shift from a recipient to a provider of international aid. Along with the contribution of deploying peacekeeping troops, police and military experts to 14 missions lead by the United Nations, the North Atlantic Treaty Organization (NATO) and the European Union, Croatia was also ready to share its experience with States emerging from armed conflicts by offering expert advice and other services in the field of security and defence sector reform.

She emphasized how support for building peace in countries coming out of armed conflicts was one of the most important and complex challenges before the United Nations. Thus, Croatia strongly supported the work of the Peacebuilding Commission. Joint action at a global level was important to find responses to many challenges, particularly towards identifying deterrents to the use of nuclear weapons. Making a contribution to efforts at preventing nuclear proliferation, Croatia had organized a regional workshop on the implementation of Security Council resolution 1540 (2004). At the same time, she reminded the Assembly that the illegal trade in small arms was “taking lives with merciless speed”.

Croatia strongly condemned terrorism and was wholly dedicated to preventing this threat. As a member of NATO and future member of the European Union, Croatia advocated peace and stability in southeast Europe. That was the reason why it also promoted a clear Euro-Atlantic perspective for all States in its neighbouring region. In that spirit, Croatia and Slovenia last year agreed on a solution to their long-running border dispute. She welcomed the General Assembly decision to adopt by acclamation the Resolution on Kosovo. Croatia advocated the accepted concept of responsibility for the protection of civilians against genocide.