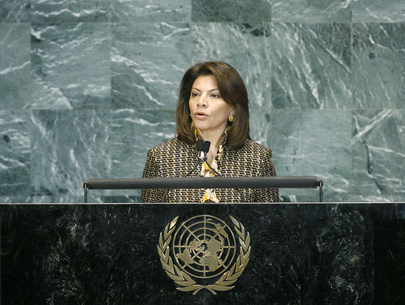 LAURA CHINCHILLA MIRANDA, President of Costa Rica, expressed renewed support for the United Nations and its significant contributions to human rights, peace, security, and sustainable development, among others. The world could congratulate itself for progress made in the areas such as education and gender equality. However, her country remained concerned with the economic and social conditions of women, children, the elderly and families. Immediate and concerted action was needed to counteract the devastating effects of climate change. Those who ignored the urgency of such action should recall the natural disasters that have affected the lives of millions worldwide.

She went on to say that Costa Rica was offended that even today, women were waiting to be stoned, populations sank in the barbarism of genocide, and nuclear weapons were amassed while barns are depleted. “Good governance starts with good national Government,” she said, at the same time noting that the success of domestic administration depended on a fair international system which would be capable to undertake the great challenges of our time. Her country was striving to represent its people’s values and promote their welfare through respecting individual freedoms and social rights. Moreover, it promoted economic growth, free trade, environmental responsibility and political transparency. Costa Rica stood firmly upon its legacy in order to act in the present and construct the future.

For leaders of countries committed to the fundamental principles of freedom and human dignity, the main question was how to advance them in today’s world. To that end, she proposed the empowerment of concepts, organisms and instruments, which promote and protect human rights. Respect of human rights relied greatly upon international justice. She reiterated her country’s support of the International Criminal Court, noting that the active use of weapons of law was an unavoidable responsibility of global governance. Turning to peace and security, she insisted on the start of negotiations for an Arms Transference Treaty, as well as advancements towards the Model Convention for the Prohibition of Nuclear Weapons.

“Peace must go beyond action. To educate for peace is to vaccinate against war,” she declared. The international community had not been capable of confronting the lashes of drug traffic, organized crime, terrorism, or weapons and human trafficking in an effective manner. The battle against transnational crime demanded more from world leaders, while the fight against the drug trade could only be won with coordination, global cooperation and a major strategy reform. In that regard, she called for the highest drug-consuming countries to take more effective actions. Furthermore, she underscored the need for worldwide solidarity.

Concluding her statement, she highlighted the importance of international aid which recognized its ethical dimension, as well as the need to establish peace with the environment and development. She hoped that, during the upcoming United Nations Climate Change Conference in Cancun, Mexico, the world’s big polluters and carbon emitters would “assume their responsibilities towards humanity”. Achieving overall sustainability was of the utmost importance in achieving the Millennium Goals. To that end, developed countries should, as a minimum, fulfil their commitments to devote 0.7 per cent of their gross national product (GNP) to international cooperation. Lastly, she stressed the need for the United Nations to adapt to the challenges of global governance, calling for more effectiveness, efficiency and transparency.