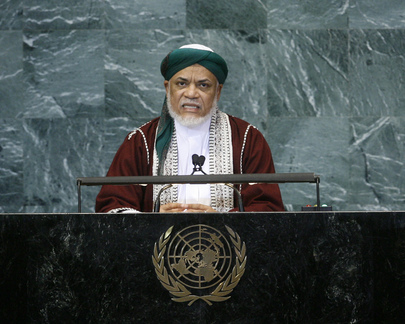 AHMED ABDALLAH SAMBI, President of Comoros, said that he wished to devote most of his address to the three-decade-old dispute with France over the Comorian Island of Mayotte, and he hoped there would be greater understanding and active solidarity concerning this matter. The future and lasting stability of Comoros depended on a final solution to that issue, he said, thanking the African Union, Arab League, and Organization of the Islamic Conference (OIC) for their unwavering support.

Recalling numerous United Nations resolutions confirming the legitimacy of Comoros’ claim to Mayotte, he said France refused to comply with those texts and continued to violate the principle of inviolability of colonial borders. That international legal principle stipulated that attempts to destroy the national unity of a country were incompatible with the United Nations Charter.

For many years, Comoros had reported the matter to the international community and had made known its willingness to search for a fair solution, but the response had been crushing, he said, underscoring “illegal” measures taken by France, including the imposition of a visa requirement on the people of Comoros wishing to go to Mayotte. France had also initiated a process for making Mayotte a “department” in terms of international law.

He said that Comoros had agreed to establish a working group to discuss equitable solutions to these problems and Mayotte had developed a proposal titled, “One Country, Two Systems” – which would be a compromise ensuring respect for international law, allow France to administer Mayotte during a certain period determined by common consent, and enable the people of Mayotte to preserve their social status and standard of living – but France had shown no positive response.

He reiterated Comoros’ support for the efforts of the international community and United States President Barack Obama to bring peace to the Middle East, saying that Palestinians wanted to live in an independent State. Comoros also wanted to contribute to efforts made to end fratricidal conflict in areas such as Sudan, Afghanistan, Somalia, Democratic Republic of the Congo and the wider Great Lakes region, he said. Additionally, Comoros supported Morocco and its proposal for autonomy as a political and definitive compromise solution over the Moroccan Sahara.