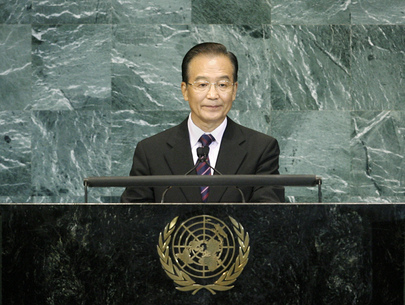 WEN JIABAO, Premier of China, noted that since the start of reform more than 30 years ago, his country had made “a historic leap from mere subsistence to moderate prosperity”. But despite the fact that China’s gross domestic product (GDP) was the third largest in the world - in per capita terms - it was just one tenth of that of developed countries. Further development, he said, would face energy, resources and environmental constraints. In addition, the country still did not have a fully fledged social security system, its democracy and legal system still had room for improvement and social ills such as inequity and corruption still existed.

“This is the real China,” he stated, adding that, while many coastal areas and large and medium-sized cities were modern and thriving, central and western regions and vast areas in the centre of the country “are still rather backward, and we have 150 million people living below the poverty line set by the United Nations”. As such, China’s goal was to achieve modernization by the middle of this century. “Development is our top priority,” he stated, and “political restructuring” would be pushed forward to achieve economic reform.

He went on to say that China was also committed to “promoting the establishment of a fair, equitable, inclusive and well-managed new international financial order and an open and free international trading regime”. China respected and protected human rights, and upheld social equity and justice. In order to narrow the development gap with the advanced countries and sustain its growth, he drew attention to the country’s medium- and long-term development programmes on education, as well as and science and technology, respectively.

On the topic of culture, he stated that the moral values and wisdom drawn from its 5,000-year-old civilization belonged not only to China, but also to the world. China would develop cultural programmes and “a moral and ethical code” commensurate with its socialist modernization drive. “The Chinese nation, who has created an economic miracle, will create a new cultural splendour as well,” he said. He concluded by noting that China’s development would not pose a threat to anyone, adding that “there were powers who sought hegemony once they grew strong. China will never follow in their footsteps.” That said, the country would not yield or compromise when it came to sovereignty, national unity and territorial integrity.

The representative of CHINA, also speaking in response to statement by the representative of Sweden, said that his country had always protected the economic, social and political rights of its citizens, in keeping with the law.  It attached equal importance to all categories of rights.  The situation in China had improved greatly, as recognized by one and all.  In the past, Sweden had seen some “dark pages” of human rights violations.  Today, it continued to violate the rights of minorities within the country and the picture was a rather sombre one.  That country did not have the right to point fingers at other countries over human rights situations.  Sweden’s comments ended up distorting the truth and amounted to a double-standard approach.   China categorically rejected the unfounded accusations that had been made.