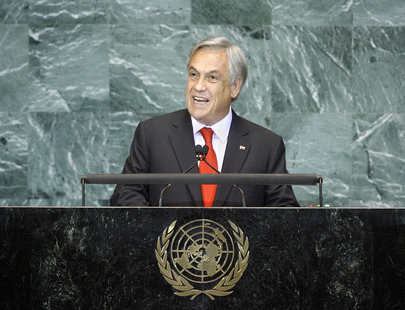 SEBASTIÁN PIÑERA, President of Chile, said his country, which had recently commemorated the 200th anniversary of its independence, was living through times of huge opportunities, but also adversity and sadness. A few months ago its central zone, where 75 per cent of the population lived, was pounded by the fifth largest earthquake and seaquake known to mankind, killing 521 people and injuring almost 2 million while demolishing entire cities and villages. Total losses amounted to $30 billion, which was 18 per cent of the GDP. Yet, out of the ruins rose a people of solidarity, brotherhood and heroism, restoring access to health services, constructing emergency housing and, in 120 days, Chile’s economy was again growing with a vigour it had not displayed for many years.

Chile aimed to eliminate poverty in the country by the end of the decade by strengthening a participatory and transparent democracy, a social market economy trusting in entrepreneurship and individual creativity, and a State that efficiently combated poverty and promoted equal opportunity. Other developing nations also had to enhance their integration and govern globalization better, lest globalization should end up governing them. Any attempt to tackle global warming, natural disasters, health emergencies, hunger and extreme poverty would require much more concentrated and concerted action by the community of nations. Meanwhile, the United Nations and multilateral organizations urgently needed to adapt to new times if they wanted to play a leading role and not be mere spectators of the events and changes of the new century. Among reforms, he said, Brazil and other countries should be included on the Security Council to make it more plural and representative of the new global reality.

He also congratulated his predecessor, Michelle Bachelet, on her recent appointment to head up UN Women and expressed the pride of the Chilean people that their compatriot would lead the global effort to achieve greater equality for women - a noble and just cause to which their Government was committed. Chile would never cease to raise its voice to defend principles such as respect for international law, the peaceful settlement of disputes and self-determination of people, which were essential foundations of stability and peaceful coexistence between nations. Chile would always be on the side of those defending their dignity and rights. Globalization had resulted in a rebirth of local identities and original identities, resulting in a magnificent opportunity to begin to do justice and promote rediscovery of peoples who inhabited lands for thousands of years before European explorers and conquerors arrived.

Chileans were proud to be a multicultural nation, but for centuries did not properly recognize or respect opportunities for the advancement of those communities. For that reason, he said, the Government granted them constitutional recognition, leading to genuine respect, appreciation and protection of their language, culture and values. This week, the representatives from Government, churches, civil society and the Mapuche people had begun a dialogue to produce a national agenda for the Historic Rediscovery of indigenous people.

In addition, the Government was also launching the Araucanía Plan to begin seriously improving the lives and opportunities of indigenous people. Chile urged those who have chosen the path of confrontation, violence and coercion to abandon their attitude and unite in the spirit of peace, harmony and unity with which it has commemorated its bicentenary. He also paid tribute to the courage, perseverance, brotherhood and hope displayed by the 33 Chilean miners trapped in a collapse since 5 August.