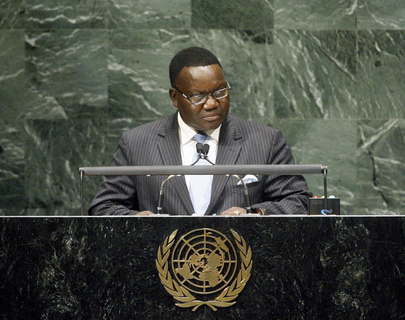 ANTOINE GAMBI, Minister for Foreign Affairs, Regional Integration, and of the Francophonie of the Central African Republic, observing that this was a particularly difficult time in the world, stressed the need for a new approach that focused on the security of individuals and on conflict settlement through peaceful means, which was clearly the most successful way to maintain security. Turning to climate change, the planet’s survival was threatened with the advancement of desert land, the degradation of ecological systems, shortened winters, and floods, to name a few. “Faced with this danger, we cannot wonder about who does what,” he stated. Instead, it was time to take action and urgent measures, and he called for implementation of the conclusions of the Bali conference. Copenhagen, he pointed out, had been a showcase of State selfishness in the area of international cooperation. He dared to hope that in Cancun, appropriate answers would be found to those serious questions.

He said that the HIV/AIDS and malaria health crises represented grave threats to the survival of humanity, especially in Africa, and he called for renewed commitment to the 2001 General Assembly Declaration of Commitment on HIV/AIDS. Maternal and infant mortality also needed the same attention. Highlighting those serious health challenges at such forums underscored the need for help, and he called for extensive mobilization of resources to successfully meet those challenges. Turning to the Millennium Goals, and specifically to the first objective of reducing hunger by 50 per cent, he said that implementation through international cooperation would be successful if it was based on support for the development of sustainable agriculture. His country was rich in natural resources, and it could have succeeded in that area if it had not been landlocked and without enough financial support for agricultural development. With significant rainfall, there were 15 million hectares of cultivatable land, yet only 600 were being utilized, and while there were 16 million pastoral lands, only 2 million cattle grazed. Yet despite the country’s needs and food insecurity, assistance had “drastically” declined in the last 20 years.

Implementing pillar four of its national strategy — the strengthening of human resources, especially in health and education — had showed unsatisfactory results, he noted. Literacy rates for adults were at 57 per cent and the net rate for primary education was at 55 per cent. The Central African Republic was most affected by HIV, even with concerted efforts to control the health crisis. If his country was to implement the Goals into its development plan, it deserved support from its partners.

His country’s elections in 2005 had been heralded by the international community, he recalled. However, it was necessary to “face the facts” that the 2010 elections had difficulties. A constitutional amendment had been voted to extend the President’s term and that of the National Assembly until new elections in January 2011. The Central African Republic was still facing security issues in the northeast because of Darfur, and in the southeast, owing to the Uganda rebellion. That situation had led to the flight of internally displaced persons and refugees from the countryside to the cities. He called for the disarmament of the Lord's Resistance Army (LRA), and as a post-conflict country, requested special consideration because of the LRA’s activities.

He informed the Assembly that his country’s defence forces would be relieving international forces, but they were desperately short of equipment. He announced that his country would launch an appeal to the international community to strengthen those forces. He meanwhile thanked those whose commitment, courage and determination were assisting his country as it emerged from crisis into peace and sustainable development.