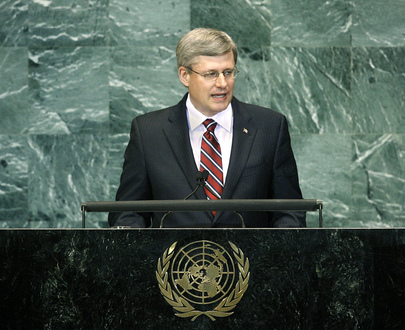 STEPHEN HARPER, Prime Minister of Canada, affirmed his country’s unwavering commitment to fulfil the mandate of the United Nations’ Charter, and noted that, as a founding Member State, Canada was the seventh-largest contributor to the Organization’s finances. It also supported the efforts of the United Nations not just financially, but with resources, aid, and recently with the lives of its civilians and Armed Forces serving and working in Afghanistan.

The spirit in which Canada took action, he continued, emphasized sustainable development. Military efforts went hand in hand with reconstruction and programmes, such as the Dhala dam project, which would have “enduring economic benefit”. Furthermore, Canada would be doubling its overall development assistance to Africa by March of next year and would allow the greater utilization and untie all aid by 2013. Acting in concert with the G-20 partners, Canada had increased the lending capacity of development organizations, including the Inter-American Development Bank and the African Development Bank.

Because of the ideals from which Canada developed its actions, he stated that, if elected, his country was prepared to serve on the Security Council. As chair of the G-8 and host of the recent G-20 meeting, Canada strove to ensure these meetings served the “broader interests of the entire global community” and to support the achievement of the Millennium Development Goals, notably through the enactment of the Muskoka Initiative. He also informed the Assembly that over the next five years, his Government would be mobilizing more than $10 billion from donor nations and private foundations for the Secretary General’s Global Strategy for Women’s and Children’s Health.

Urging for words to be turned into actions, he informed the Assembly that Canada had forgiven a total of $1 billion in debt owed by the world’s poorest countries. It was not the time to do “the least we can do”, but to reach for much higher goals that were within capacity of the international community. Towards this end, he said, the world needed to adopt an enlightened view of sovereignty. In light of the recent global crisis, he observed, all nations had been painfully reminded that “in this shrinking world, we travel together in one boat, not as solo-voyagers, and that how we travel together matters”. He then called for Member States to recognize that what was beneficial to others in fact might be the very best way to pursue one’s own interests.