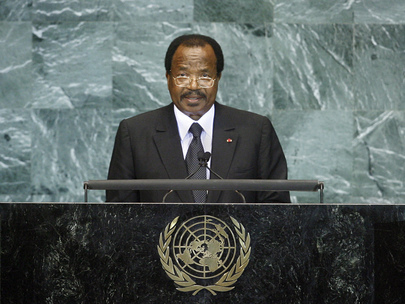 PAUL BIYA, President of Cameroon, said the Millennium Development Goals had called for halving poverty in the world by 2015, yet 10 years after the Goals had been adopted, more than a billion people were still living in poverty. In addition, results in the seven other priority areas under the Goals were disappointing, and even unsatisfactory. The global economic crisis was certainly to blame. Indeed, the slowdown in worldwide activities and the recession in some cases had monopolized the attention of countries in the North, who had given priority to reviving their economies and resolving their social problems. Their response was understandable, but the root of the problem resided in the dangerous and ever-widening gap between the rich and poor, which exacerbated tensions and jeopardized international peace and security.

The situation in Africa was a case in point, he continued. It was the continent most affected by extreme poverty, which was generally accompanied by food shortages, epidemics, population movements and insecurity. “Is it any wonder that such profound misery sometimes reaches explosive proportions?” he asked. The international community could no longer remain indifferent to a threat that could undermine efforts to advance democracy and ensure development. Africa had changed significantly in the last 50 years since independence. It was time for a broad-based ideological debate that would lead to the realization of the “famous Marshall Plan” that was often mentioned but had yet to see the light of day.

Cameroon had organized an international conference for its fiftieth anniversary of independence, he said. The final declaration could serve as a “guide” for rehabilitating Africa with regard to both its economy and its participation in international life. That would ensure the continent did not remain aid-dependent and that it played a rightful role in global affairs since it was affected by most major problems of modern humanity, from migratory flows to financial regulation to global warming.

Certainly, Africa wanted to emerge from poverty, he concluded, but Africa also wanted to be free from fear and want and to embrace a future without anxiety. Over the last decades, Cameroon had embarked on that path by setting up representative institutions, establishing the rule of law and promoting respect for human rights. It had made significant progress in the areas of public finance, education and health. If the trend continued in the medium term, Cameroon would attain the status of an emerging country.