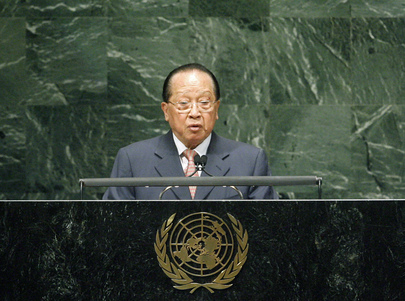 HOR NAMHONG, Deputy Prime Minister and Minister for Foreign Affairs and International Cooperation of Cambodia, said the global economic and financial storm seemed to be over. Economic recovery was far from complete, however, especially in developing countries. As economic recovery took place, a joint effort was needed to boost confidence and sustain the momentum of worldwide growth. Cambodia had set its own Millennium Development Goals and it had been listed among 20 countries making the most progress on the Goals. Climate change was also a serious challenge; the fifteenth Conference of Parties summit in Copenhagen had laid down a good foundation for advancing international cooperation on deforestation, renewable energy and financial support for poor countries. Binding agreement in Cancun was uncertain; a spirit of compromise was, therefore, necessary to ensure a fruitful outcome and save humankind from further serious catastrophes. For its part, Cambodia had launched its own initiative, the Cambodia Climate Change Alliance and had steadily implemented its projects within the Framework of Reduction Emission from Deforestation (REDD).

Food security was an issue that deserved great attention, he said, it was Cambodia’s hope that the international community would redirect and increase official development assistance to emphasize food production. In that context, the $20 billion pledged at the 2009 Group of Eight (G-8) Summit to support agricultural production in poor countries was opportune, but the time disbursement of the funding was imperative. For Cambodia, food production was at the top of its priorities, with agriculture a springboard for broader economic development.

Turning to other world issues, he said the situation in the Korean peninsula was a threat to regional peace and security; he urged parties to avoid escalating tension and to undertake negotiations as soon as possible. Cambodia warmly welcomed the recent direct talks on the Palestinian-Israeli issue and urged both sides to look for a compromise. Cambodia also called upon all Member States to implement resolutions relating to the United States embargo on Cuba. The functioning of every organ of the United Nations should be readjusted and reinvigorated, with priority being given to increasing the representation of developing countries on the Security Council. Reform had been discussed for many years, yet particular interests had impeded reform.