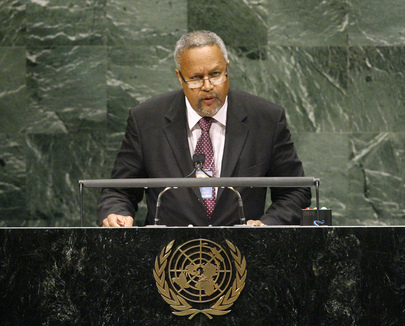 ANTONIO PEDRO MONTEIRO LIMA (Cape Verde) said in negotiations regarding the United Nations Framework Convention on Climate Change and its Kyoto Protocol, he had seen a tendency towards pessimism rather than optimism. He urged the international community to act effectively, as time was running out to combat climate change. States must take action together to curb global warming and avoid the impending sea-level rise which would drastically affect many countries, especially the most vulnerable small island developing States. Cape Verde had long faced the impact of climate change, having suffered through drought and desertification, among others. His country had undertaken efforts to reduce the effect of climate change, he said, noting that similar steps had been taken in Africa and the small island developing States. Financing was a key factor in the implementation of those efforts, therefore, the fast-track funding announced in Copenhagen needed to be set up quickly.

The international community must continue to support the most vulnerable States by helping them minimize risks. Many countries were already facing issues such as population shifts and forced migration, so global solidarity was a question of their survival. “Let us not offer up the weakest as sacrificial lambs, for tomorrow we might be in their situation”, he stressed. For Cape Verde, the ocean was its environment and represented its potential for the future. He called for efforts to protect and preserve the ocean, noting that an agreement had been made between coastal States along the Atlantic Ocean to protect it. Through that agreement, countries committed to make the Atlantic an area for trade and active solidarity. Furthermore, he underscored the need to protect and empower women. His country had made progress in that vein, but challenges remained. He noted, however, that Cape Verde had achieved gender parity in primary and secondary education.

Most importantly, the world must continue to work for peace. The United Nations played a vital role in that regard because it had a clearly defined mission, and its Member States all shared in the responsibilities and decision making process. World peace remained a distant goal, as hot beds of tensions still existed. His country had always been an advocate of general and complete disarmament, hoping that arms could be replaced with a desire to cooperate and view other States as necessary and complementary partners. “Drug trafficking is the scourge to our future, particularly in West Africa,” he said. There must be strong efforts by drug consuming countries, as well as producing nations, to fight it, so that children could live and develop without drugs. Lastly, he highlighted his country’s achievements since gaining its independence 35 years ago, particularly with respect to the achievement of the Millennium Goals, and then called on the international community to work together so that peace would no longer be “a dream deferred”.