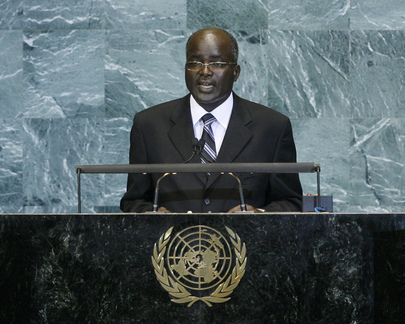 GERVAIS RUFYIKIRI, Second Vice President of Burundi, noted that Burundi had renewed its national institutions “from top to bottom”, with democratically elected institutions signalling reconciliation and stability.  The winning political party was determined to promote national reconciliation and political tolerance.  Indeed, the national constitution provided for mechanisms of political inclusion in the management of affairs of state.  The new legislature was engaged in pursuing its program to consolidate peace and reinforce security for all, notably through the disarmament of the civilian population and the socio-economic reinsertion of the demilitarized and repatriated.

The promotion of good governance was a main concern of the Government.  On the subject of political governance, the country would continue to favour the emancipation of political parties in the spirit of enhanced dialogue.  As concerned economic governance, efforts would be made to continue to improve conditions for business to benefit local and foreign investments.  The nation reasserted its commitment to combat “with zero tolerance” financial fraud.  Moreover, the judiciary would do everything in its power to combat impunity of all crimes, and transitional justice would be promoted during this parliamentary session.

All efforts would be made towards social development to combat poverty, prioritizing agriculture and livestock, energy, social infrastructure, tourism and regeneration of the environment and new technology.  Special attention would be given to public and private partnerships.  In the domain of education and health, many schools and hospitals would be built throughout the nation, with a view to improving quality.  To further strengthen the Burundi economy, the nation would heighten its role in regional organizations to develop programs and projects that were of common interest.  That would require significant support, and he strongly appealed to the international community in that regard.

He stressed the promotion of equity and the need for additional efforts to allow developing countries to be sufficiently represented in the World Bank, International Monetary Fund and others.  Also, the nation stood by the African Union in what concerned Security Council reform, notably that Africa have two permanent seats with all the privileges afforded to the five permanent members.

Africa — in particular — he stated, was harshly affected by climate change due to a lack of resources.  Countries must provide financing towards the transfer of technologies and capacity-building for those most in need.  In doing so, countries would also combat food insecurity, which was also a threat to sustainable development.  Burundi called upon rich countries to act for developing countries, particularly those in post-conflict, through support to key socio-economic sectors.  It was urgent for development partners to respect the promises they made to developing countries, particularly in Africa, and to increase official development assistance.  Within a framework of international solidarity all countries must combine their efforts “to make the world a harbour of peace”.  As concerned Somalia, the nation renewed its request for the improvement of living and working conditions for the armed forces and called on other countries to deploy more troops to AMISOM, so it could fulfil on its mandate.