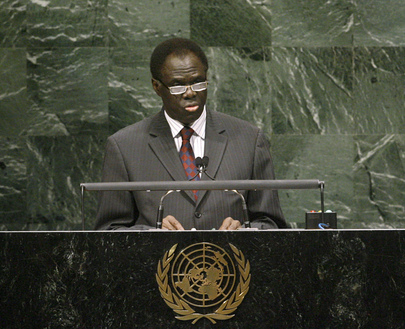 MICHEL KAFANDO (Burkina Faso) noted that with many global crises occurring all at once, the international community was wondering if it would be able to achieve the Millennium Goals by 2015. In that light, last week’s high-level Millennium Development Goals review gave hope for commitments to the poorest countries. However, the world could only take on a “more human face” to deal with social issues if there was a healthy and calm climatic environment.

To that end, he welcomed the Climate Conference in Copenhagen in December 2009, despite the fact that no concrete agreement had been reached on greenhouse gas emissions. The Conference had nevertheless pushed forward the debate on providing assistance to poor countries, as well as measures to reduce deforestation. He hoped assistance commitments made would be fulfilled, and he was hopeful for success at the next meeting of the Parties to the United Nations Framework Convention on Climate Change in Cancun. Flooding and other climate disasters had reminded the world just how fragile the environmental balance was.

Conflict resolution, particularly in Africa, remained a major challenge. While some crises had more or less been overcome, others continued to be matters of serious concern. Highlighting political progress made in Togo and Côte d’Ivoire, he then turned to Guinea and called on all political players in that country to enable it to open up quickly to democracy. Burkina Faso was concerned with the current instability in Somalia, as insurgents continued to launch attacks against interim forces and the African Union Mission in Somalia (AMISOM). He urged the international community to make good on commitments to support Somalia in its rehabilitation process. Efforts to end to piracy in the high seas, including in Somalia, would not last unless the root causes were addressed. Extreme poverty served as the “most fertile soil” for such crime, he noted.

Turning to Western Sahara, he welcomed the impetus of the Secretary-General to draw attention to the situation, and called for continued dialogue to realistically settle the ongoing dispute. Scourges such as drugs and narcotic trade often opened the door to more problems. Combined efforts were needed to combat money-laundering, terrorism, the proliferation of nuclear weapons and transnational organized crime. “Collective efforts must be taken to secure peace and security,” he stressed, urging all States to join in. On the issue of United Nations reform, he said it had been on the agenda for many years and some progress had been made. He hoped, however, that other aspects of the reform would be achieved in due time, particularly within the Security Council.