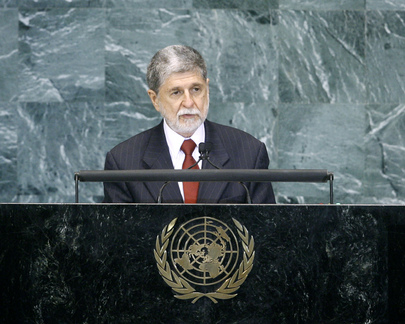 CELSO AMORIM, Minister of External Relations of Brazil, noted that, within days, more than 130 million Brazilians would go to the polls “to write another important chapter in the history of our democracy”. Brazil had changed in the last eight years: sustained economic growth, financial stability, social inclusion and the full exercise of democracy had converged and reinforced one another. Over 20 million Brazilians rose out of poverty and many others out of extreme poverty; nearly 30 million people had joined the middle class. The country had achieved almost all of its Millennium Goals and was well on the way to meeting them all by 2015. He said promotion of development was a collective responsibility and, therefore, Brazil was working with other countries to replicate its successful experiences.

Brazil’s actions on the international stage over the last eight years, was driven by a sense of solidarity, he said, and it was possible to have a humanist foreign policy without losing sight of national interest. That policy was supported by the South-South cooperation. The Poverty Alleviation Fund, created by the IBSA forum, which brought together India, Brazil and South Africa, financed projects in Haiti, Guinea, Bissau, Cape Verde, Palestine, Cambodia, Burundi, Lao People’s Democratic Republic and Sierra Leone. The country had also substantially increased its humanitarian aid.

Africa, he continued, occupied a special place in Brazilian diplomacy. Since President Lula da Silva had taken office, he had made 11 visits to some 20 African countries. Brazil had set up an agricultural research office in Ghana and a model cotton farm in Mali, among other projects. Through trade and investment, it had also helped Africa reduce its dependency on a few centres of political power. Brazil was also helping Guinea-Bissau address its challenges regarding development and encouraged reforms, especially in regard to the Armed Forces.

Turning to Haiti, Brazil mourned the hundreds of thousands of Haitian people that lost their lives in the devastating earthquake. Many Brazilians also died, such as Dr. Zilda Arns, who dedicated her life to the poor, and Luiz Carlos da Costa, Deputy Head of the United Nations Stabilization Mission in Haiti (MINUSTAH), in addition to 18 peacekeepers. Regarding Brazil’s commitments to Haiti, he said: “We are keeping our promises and will keep a watchful eye.”

In recent years, the Government had also invested heavily in integration and peace in South America. It had strengthened its strategic partnership with Argentina, and reinforced the Southern Common Market (MERCOSUR), with unique financial mechanisms among developing countries. He said the establishment of the Union of South American Nations aimed to consolidate a genuine zone of peace and prosperity. With the Community of the Latin American and Caribbean States, launched in Bahia and confirmed in Cancun, reaffirmed the region’s willingness to extend the region the ideals that were priorities for South Americans.

Brazil had restated its condemnation of the illegitimate embargo against Cuba and had condemned the coup d’ état in Honduras. He expressed hope that the world had learned a lesson from the invasion of Iraq, that “blind faith in intelligence reports tailored to justify political goals must be rejected”. Nevertheless, achieving a secure world required the promise of total elimination of nuclear weapons. As the world recovered from the financial and economic crisis, he said the Doha Development Round of world trade negotiations demonstrated that the world had not demonstrated the necessary commitment to global economic stability; instead they are dictated by “parochial interests”.

Brazil, he said, continued to build peace. The Tehran Declaration of 17 May, signed by Brazil, Turkey, and Iran, removed obstacles that had previously prevented agreement. Nevertheless, the world could not risk a new conflict like Iraq. Regarding the Middle East, he hoped the current talks between the Palestinians and Israelis would produce a Palestinian State in line with the pre-1967 border; one that provided the Palestinian people a dignified life. Crucial to the process was freezing construction in the settlement in the occupied territories, lifting the Gaza blockade and ending attacks against civilian populations. He noted that Brazil was home to about 10 million Arab descendants and an important Jewish community living in harmony. Therefore, it would not shy away from giving its contribution to the peace, “which we all yearn for”, he said.

In his eight years in office, he said, President Lula had developed an independent and innovative foreign policy that did not distance itself from the values of the country’s values: peace; pluralism; tolerance; and solidarity. In closing, he reaffirmed Brazil’s unwavering commitment to human rights. He said: “ Brazil will go on fighting to make these ideals real.”