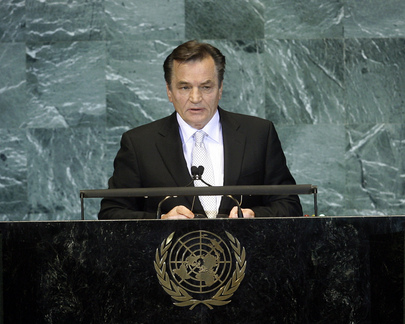 HARIS SILAJDŽIĆ, Chairman of the Presidency of Bosnia and Herzegovina, said that his country had come a long way since the Dayton Agreement brought peace 15 years ago and he thanked the Governments, organizations and individuals that assisted them in travelling that road.  Unfortunately, the restoration of a pluralist society remained the most difficult task ahead, after the old, genuinely multicultural society had been brutally and intentionally torn apart.  Hope, however, lay in the upcoming constitutional changes that would lay a foundation for the new generation to bridge old divides.  No matter what, the country would strive to revive the tolerant spirit of its society because it believed that cultural pluralism was mankind’s most precious treasure.

A good economy, he said, could be a powerful tool to achieve that goal and the Bosnia and Herzegovina had invited international investors to participate in developing its rich resources.  It continued to develop infrastructure and agricultural resources, but not at the optimum pace.  Similarly, the education system was generally improved but remained in some aspects hostage to divisive political influences.  Rising trade activities had improved regional relations and more progress could be unlocked by more intensive regional cooperation.  He hoped such opportunities would take advantage of the resource of the country’s youth and boost employment opportunities.  Defence reform continued to succeed.

Progress was hindered, however, by what he called “the remnants of those who still believe in the completion of the political project that proved catastrophic not only for Bosnia and Herzegovina, but for the whole region”.  After hundreds of thousands of non-Serb civilians had been expelled from one part of the country, they were now publicly calling for the secession of that area, in a sense, asking the international community to reward the genocide in Srebrenica and other horrors of the early 1990s.  He vowed that they would not succeed, being unable to count on the mighty armies of Slobodan Milošević, which had been heroically defeated, and failing to take into account the will to defend Bosnia and Herzegovina.

Unfortunately, inspired by inadequate response from the international community, those forces would continue to destabilize the region, he said.  The collective resolve to prevent the escalation and opening of fresh wounds in Bosnia and Herzegovina must not fail this time.  He was confident that progress in the country could not be stopped and that the entire region would maintain stability and achieve prosperity in the coming years, thus fulfilling the dreams and desires of all its citizens.