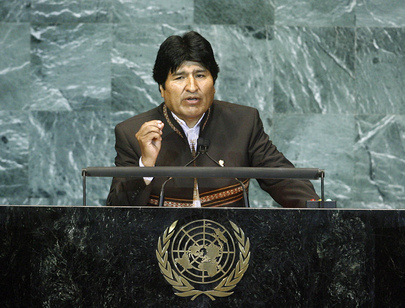 EVO MORALES AYMA, President of Bolivia, said that his small country, with some 10 million people, had undergone many structural and social changes in the last four and a half years. Economic growth was now nearly 5 per cent and there had been a democratization of the national economy that had improved the lives of the poorest people, including indigenous people and workers. The country’s recovery of its gas and other natural resources was behind many of the positive economic changes. Previous contracts with multinational energy companies had given them 82 per cent of the revenue stream from those resources and only 18 per cent had gone to the Bolivians, he added.

He acknowledged that companies had the right to recover their investments and earn profits, but not to an 82 per cent share. In May 2006, the first year of his Administration, the Government had assumed control of all petroleum deposits and nationalized the companies. The investing company had enough profits to ensure the company would not be harmed and recover their investments. The companies were still invested, but there was not “an ongoing sacking of our natural resources”. For the first time, the Government had a surplus, and an income stream for the most sensitive sectors of the population, including the elderly and youth.

He went on to say that the International Monetary Fund (IMF) had to address the damages that its restructuring programmes had brought to Bolivia and Latin America, as well as their impact on the planet. Noting the differences between cultures and continents, he said the international community had to get beyond its differences and unite so human rights for all would be protected.

He proposed that all current Governments shape an alliance to save humankind by saving “Mother Earth”. The alliance’s first objective would be to guarantee human rights for everyone. Water and all basic services, such as energy and electricity, were human rights. He stressed that the rights of migrants had to be protected. He had heard that United States President Obama had rejected the immigration law in Arizona and some of his Administration’s policies must reflect that.

He urged an end to policies that expelled migrants. He criticized the building of walls in Mexico and Palestine. “Walls were built for cattle and sheep. We cannot confuse human beings with animals,” he said. “How was it possible to prevent people from going from one continent to another?” He noted that commerce could freely circulate, but people could not. It was necessary to put an end to such walls and there could not be embargoes, such as the one against Cuba. He appealed to President Obama to put an end to the economic embargo against Cuba and in Palestine.

The second objective of his proposed alliance would be to save humanity by saving Mother Earth. He objected that a price was being placed on the environment and said that “carbon bonds” could not be bartered as if the forests were for sale. “How can Mother Earth be turned into a business?” he asked. An alliance was necessary to cool down the planet and control global warming. He urged developed countries to assume their responsibilities that had been made under the Kyoto Protocol.

The third objective was promoting equality and social justice for all people, which was necessary to ensure peace. The best way to fight against the drug trade was putting an end to banking secrecy laws. The Bolivian Government was making strong efforts to reduce its coca crops. It was important to end the interventions in Afghanistan and Iraq as well as the threat against Iran. All nuclear arsenals must be taken out of commission as they were a threat to life.

The last objective of the alliance would be to strengthen the United Nations by democratizing the Organization — “a difficult task”. He said the authoritarian regime led by the United States was only emboldened by the right to veto extended to it and other permanent members of the Security Council. The international community must ensure that the United Nations was an anti-capitalist Organization. He proposed a “war cry” for saving humanity, with the slogan: “The Planet or death”. There had to be a political will to save the people of the world.