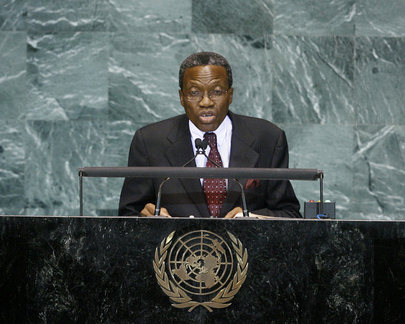 JEAN-MARIE EHOUZOU, Special Envoy of the President of Benin, reiterating his Government’s full support for the United Nations Charter, said the Organization’s raison d’être was to address various interests that defined areas of tension. If it did not exist, it would have to be created. He noted the irreplaceable role of the United Nations and its specialized institutions, which provided an invaluable service. Regarding the Millennium Development Goals, it was important to take into account the deadline set, he said, noting the global community’s duty to mobilize resources to address causes of the global financial crisis.

Indeed, the Goals must be achieved and it was important that the United Nations use its influence to help countries in difficulty, and ensure the survival of vulnerable groups who faced decimation from disease and hunger. Addressing hunger, he said the short-term priority should be to strengthen social protections in low-income countries, and promoting small and medium-sized businesses. In the medium- and long-term, States should rethink their agriculture policies to create a balance between cash crops and food products.

More broadly, international monitoring mechanisms should be evaluated to better forecast systemic shocks, he said, underscoring that increasing agriculture’s share of ODA from 3 per cent to 10 per cent should be implemented with the political will commensurate to the challenge. For its part, Benin was carrying out social transformations needed to ensure the participation of all groups in development efforts. It was working to mechanize agriculture, while plans to rationally manage water were also under way.

The Government was also considering promoting biofuel crops to reduce its dependence on hydrocarbons, he said. West Africa was affected by soil degradation and frequent floods due to climate change and it was important to provide more resources for implementing the United Nations Framework Convention on Climate Change. Development institutions should focus on revitalizing soil to increase food availability.

In March 2011, Benin would organize elections, he said. In collaboration with the United Nations, Benin had created a computerized electoral list to ensure transparency and reduce the risks for post-election protests. Despite differences over the process, its schedule and use in the 2011 elections, Benin would be able to “once again surprise the world”, and he urged continued support for his Government.