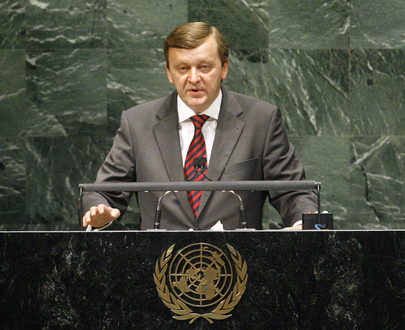 SERGEI ALEINIKI, Deputy Minister for Foreign Affairs of Belarus, said it had been clearly demonstrated that all challenges and threats, however difficult and dangerous, could only be overcome if countries worked together. Particular attention should be given to the economic sphere, and goals could be achieved even in the current situation if the necessary financial resources were used to support development. What had been done so far was insufficient. Analysed in an objective way, the largest developed countries spent trillions of dollars supporting their own economies, while finances for developing countries remained low. Real development aid was needed in order to help developing countries and countries in transition.

He said the work and potential of the Bretton Woods institutions must continue to be updated, helping those developing countries with decisions arising in their governing bodies, and the General Assembly must raise its voice on that important issue. Additionally, Belarus had submitted its candidature for the Economic and Social Council for 2011, and was ready to actively work in that regard. He went on to say that measures to address greenhouse gases were inadequate and could lead to irreversible consequences. It was time to end the competing ambitions with regard to climate change, or attempts to protect the climate would prove unsuccessful.

Closely related to the protection of climate was the issue of reliable systems of global security and the development of green and low-carbon economies, he said. However, many States did not have clean-energy technologies, which “put a break” on their development. Such States could not on their own immediately establish green economies, and should be assisted including for the use of renewable energy sources.

As next year would mark the twenty-fifth anniversary of the Chernobyl disaster, he said, it was unfortunate that addressing the remaining negative consequences of that event was a low priority. Given that situation, Belarus and Ukraine intended to prepare a draft resolution on researching, investigating and minimizing the consequences of the Chernobyl disaster and its lingering impacts, and he called for the General Assembly’s support in that regard.