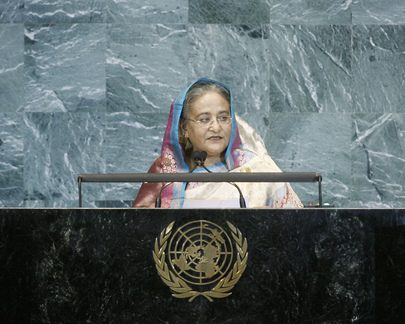 SHEIKH HASINA, Prime Minister of Bangladesh, told the Assembly that Bangladesh was a secular, progressive nation that fulfilled the promise of democracy, good governance, human rights and the rule of law made by her father, Bangabandhu Sheikh Rahman, from this podium 36 years ago.  Bangladesh had established an International Crimes Tribunal to try persons responsible for war crimes and crimes again humanity committed during its war of liberation in 1971 and immediately after.  This action was in accord with the rule of law reflected in the Rome Statue of the International Criminal Court, which Bangladesh had ratified.  She recalled the 15 August 1975 terrorist act that killed her father and 18 family members.  A target of several assassination attempts since her return home from exile in 1981, she said the most audacious was an grenade attack on 21 August 2010 at a public rally being held to protest terrorist attacks and killings.  The attack left 24 people dead and more than 500 people injured.

“I want to unequivocally state that terrorism will not be allowed in the soil of Bangladesh,” she said, adding that the country was a party to all United Nations Conventions related to terrorism.  The country’s policy against terrorism and love for peace had led her to negotiate the 1997 Chittagong Hill Tracts Accord.  In the international sphere, the country’s commitment to peace was reflected in its unflinching support of United Nations peacekeeping missions.  Since 1988, Bangladesh had sent 97,000 troops to 24 countries on 32 missions and lost 92 soldiers.  Bangladesh was the top troop-contributor to United Nations peacekeeping troops.  Sadly, despite that involvement, the country’s presence in the Department of Peacekeeping Operations remained negligible.

Turning to the negative impact of climate change and global warming, she said Bangladesh faced serious threats, such as food security, the displacement of people and depleting biodiversity.  The increasing frequency of floods, cyclones, droughts and other natural disasters had created climate migrants whom were crowding the country’s cities and stressing its limited infrastructure and creating social disorders.  The country had adopted a 134-point adaptation and mitigation action plan, which needed enormous funds.  At the fifteenth Conference of the Parties to the United Nations Framework Convention on Climate Change last year, Bangladesh had worked hard to achieve a legally binding agreement and create an international “climate fund” to help the most vulnerable countries.  She urged world leaders to use the sixteenth Conference of the Parties this year to conclude a positive agreement and contribute to this international climate fund.

The world was still recovering from the world economic crisis, she said.  The least developed countries, suffering as all countries from reduced exports, would benefit through more liberal trade concessions, such as duty-free and quota-free market access.  The least developed countries sought a quick end to the Doha Round of the World Trade Organization talks and fulfilment of the Organisation for Economic Co-operation and Development countries’ official development assistance commitments to developing countries of 0.7 per cent of gross national income, with 0.2 percent to the lest developed countries, as outlined in the Brussels Programme of Action.  Bangladesh had maintained an annual growth rate of 6 per cent.  It aimed to use technology to accelerate its socio-economic development and achieve a “digital Bangladesh” and transform the nation into a middle income country by 2021, the “Golden Jubilee Year” of the country’s independence.  The world’s fast developing technologies and new challenges, such as climate change, terrorism and economic interdependence, were drawing the world together.  “Indeed, our destiny is now one, as is our burdens and responsibilities”, she added.