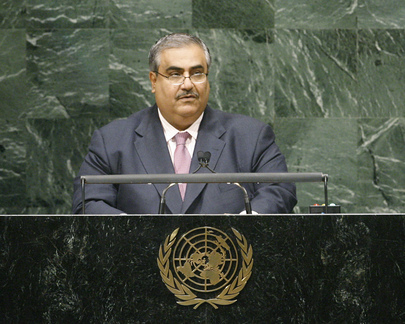 SHAIKH KHALID BIN AHMED BIN MOHAMED AL KHALIFA, Minister for Foreign Affairs of Bahrain, said that most important among the challenges facing the world was the attainment of the Millennium Development Goals by the year 2015. Huge and outstanding efforts had been exerted towards that end and Bahrain had had a leading position. Those had included the field of social welfare, provision of free and quality basic education, health care, improvement of child and maternal health, empowerment of women, gender equality, the expansion of the social safety net for the poorest of the population, the “insurance against unemployment” scheme, and expansion of the scope of vocational training aimed at enhancing Bahrain’s human resources.

In 2008, King Hamad bin Isa Al-Khalifa launched Bahrain’s Economic Vision 2030 constituting a historic turning point and a gateway to economic reform, he continued. Launched in conjunction with political reform, it laid down the future tracks of the national economy until 2030, and aimed to ensure the transformation of the economy from one based on oil revenues to a competitive and productive economy, planned by the Government, but led by a vibrant private sector. The outcome had been a growing middle class that enjoyed a high standard of living, due to increased productivity and well-remunerated jobs. The Vision aims to establish a society based on the principles of sustainability, competitiveness and equity.

Describing the Arab-Israeli conflict as one of the most important issues confronting the international community, he noted that it had been stuck for decades now, as failure followed on the steps of hope, and as frustration at the constant regression of the peace process overshadowed optimism. Yet, his country persevered hoping for a just, durable and comprehensive peace that restored rights to their legitimate owners and opened doors for mutual acceptance as neighbours, friends and partners with all the respect and commitment required. Bahrain valued the historic commitment and tireless efforts of United States President Barack Obama, who had given impetus to the peace process in the Middle East and renewed hope by launching resumed direct negotiations between Palestine and Israel. Those efforts required the unfailing commitment and support of all parties to take the necessary measures towards the attainment of peace, and to refrain from placing hurdles in its path. They needed to take steps towards coexistence among all through enhanced communication and outreach, to offer each party the opportunity to convince the other to coexist and become a partner.

Bahrain looked forward to a peaceful and prosperous Iraq capable of discarding any foreign intervention in its domestic affairs and faithful to its Arab-Islamic identity, inclusive of all ethnic and cultural affiliations, he continued. The country was also keenly interested in the stability and prosperity of the people of Iran and looked forward to the role that Iran could play to eliminate the “ghost of discord” around its nuclear programme. The settlement of the question of the United Arab Emirates islands occupied by Iran, be it through direct negotiations or by referral to the International Court of Justice, would also constitute a vital step forward towards laying the foundations for regional cohesion. That would generate the stability necessary for development in the interest of all peoples of the region.