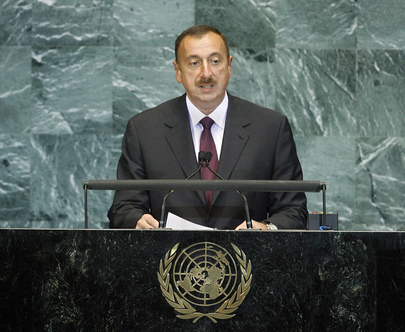 ILHAM HEYDAR OGLU ALIYEV, President of Azerbaijan, recognized the central role the United Nations played in maintaining international peace and security and promoting development. In addition, the Organization needed to be stronger and more capable of engaging in a range of global issues in every part of the world and, as a country suffering from the devastation of war and occupation, he believed in the importance of faithful observance of the worldwide accepted norms and principles of international law concerning good neighbourliness, friendly relations and cooperation among States. The ongoing armed conflict between Armenia and Azerbaijan represented a major threat to international and regional peace and security. The conflict resulted in the occupation of one fifth of the territory of Azerbaijan.

It was internationally recognized that the Republic of Armenia bore the primary responsibility for occupying Azerbaijan’s territories, and committing the most serious international crimes during the conflict. The Security Council had adopted four resolutions, and expressed its full support to the sovereignty and territorial integrity of Azerbaijan. Despite ongoing political efforts towards a resolution to the conflict, the activities in the occupied areas of Azerbaijan were in gross violation of international law and served to further consolidation of the current status quo.

Consistent measures were being undertaken by Armenia with the purpose of altering the historical and cultural features of the occupied areas. The soonest resolution of the armed conflict in and around the Nagorno-Karabakh region of Azerbaijan remained a primary task. The Organization for Security and Co-operation in Europe (OSCE)-Minsk Group countries had extended their efforts to bring peace and stability to the region. The resolution of the conflict envisaged the withdrawal of Armenian forces from the occupied Azerbaijani territories within the fixed time framework, restoration of communication, return of refugees and international security guarantees.

Despite the unresolved conflict over Nagorno-Karabakh, and occupied territories, the Government of Azerbaijan succeeded in guaranteeing political stability, democratic development, economic prosperity and social welfare. In addition, the country possessed oil and gas reserves. As an active member of the Extractive Industries Transparency Initiative, Azerbaijan used its energy revenues for development in an open and transparent manner. He concluded by saying that Azerbaijan demonstrated full support for promotion of sustainable development and global prosperity for all.

The representative of Azerbaijan noted there was a “mountain of evidence” that proved that Armenia had attacked the Nagorno-Karabakh region, and carried out massive ethnic cleansing.  Those actions had led to the death of thousands of Azerbaijanis, mostly elderly persons, women and children.  What the Armenian side saw as an exercise of self-determination had been unambiguously qualified by the Security Council and the General Assembly as the illegal use of force.  The unlawful use of force, which led to war crimes and genocide, was contrary to sustainable international law.  The political agenda of Armenia that disrupted a multi-ethnic society was fated never to be realized.  Armenia must realize there was no alternative rather than a prompt end to its occupation of Azerbaijan.

Taking the floor again in right of reply, Azerbaijan’s delegate said he understood that the United Nations was not to be used for political advantage and promotion of ethnic and religious superiority.  He added that Armenia’s stance was not in the spirit of promoting peace, and he expected that Member States would ask it to cease its aggressive behaviour.