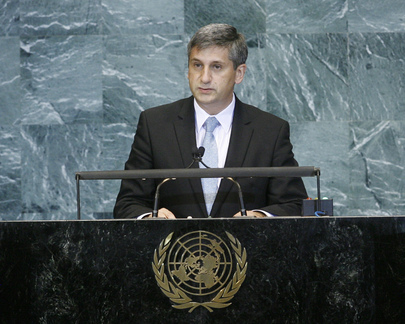 MICHAEL SPINDELEGGER, Federal Minister for European and International Affairs for Austria, said the tragic earthquake in Haiti, devastating floods in Pakistan and the financial crisis were a reminder that the global challenges of the twenty-first century required concerted action.  The United Nations needed to be at the centre of our activities.  It was the forum in today’s multilateral system that enjoyed the highest degree of legitimacy, with inclusiveness its key advantage.  But that moral authority had to be matched by mechanisms and resources to ensure its effectiveness.  Adherence to the rule of law was fundamental; all multilateral efforts needed clear and predictable rules which were equally applied to all Member States.  Member States, but also men and women around the globe, must be able to trust the United Nations capacity to turn the promises of the Charter into reality.

Cooperation with other international actors was indispensable for the United Nations efforts to deal with complex challenges; Austria and the European Union were reliable partners in areas ranging from development cooperation and humanitarian aid to the maintenance of international peace and security to promoting respect for the rule of law and human rights.  He expressed hope that the initiative to obtain modalities for the Union’s participation in the General Assembly reflected in the Lisbon Treaty would soon be adopted.  That would greatly help reinforce the productive partnership of the United Nations with an organization fully committed to the principles and objectives enshrined in the Charter.  Austria was also proud to contribute to the work of the United Nations through hosting its headquarters in Vienna, and the United Nations Office on Drugs and Crime based there was central to the effort to combat corruption and organized crime.  Corruption presented one of the major challenges for the reduction of poverty and the recent foundation of the International Anti-Corruption Academy in Austria was an important step to address this challenge.

The fight against climate change, one of the central issues of the twenty-first century, required global consensus now to achieve the goal to limit global warming to 2° C and reverse the trend of rising greenhouse gas emissions by 2020.  Austria was committed to contribute to that difficult endeavour, which also gave opportunity to create sustainable, qualitative growth at the global level.  All efforts were also needed to live up to the renewed commitment to the Millennium Development Goals, he said.  As a member of the European Union, Austria was also ready to fully play its part in the Israel-Palestine peace talks, which offered the first concrete prospects for sustainable peace in the Middle East in many years.

Efforts towards internal reform of the United Nations, including enlargement of the Security Council to reflect today’s realties, were needed to ensure its central role in global governance.  As an elected member of the Security Council, Austria was committed to its work.  It was also vitally important for the Council to effectively oversee peacekeeping mandates adjusted to the needs of the twenty-first century.  Peacekeeping and peacebuilding must be integrated, he said, and Austria strongly supported enhanced interaction between the Security Council and the Peacekeeping Commission.  Protection of civilians in armed conflict was the yardstick for success, and credibility of the United Nations and the Security Council resolution 1894 (2009) was a major step in efforts to better protect them.  But the resolution had not yet had full impact on the ground, and mechanisms such as the International Criminal Court should be a viable tool to reinforce accountability.  Ensuring implementation of Resolution 1894 would be a key priority for Austria during the remainder of its term on the Council.

It was also of utmost importance to enhance the role of women in conflict and post-conflict situations, and the latest shocking mass rapes in eastern Congo showed there was urgent need for action.  Austria welcomed the decision to establish UN Women, which would make the United Nations a stronger and more effective partner in advancement of women worldwide.  As chair of the Al-Qaida/Taliban sanctions committee, Austria saw the United Nations as pivotal to counterterrorism efforts and was committed to enhancing due process in sanctions regimes.  To end on a positive note, Austria was honoured to have contributed to the agreement to a comprehensive Action Plan restoring confidence in the Nuclear Non-Proliferation Treaty.  For the first time, a “world without nuclear weapons” was accepted as the goal by all parties and the catastrophic consequences of use of such weapons were recognized — an important step towards the eventual legal ban of nuclear weapons by means of a convention or legal framework.   Austria would also support the establishment of a Competence Centre for Nuclear Disarmament and Non-Proliferation in Vienna early next year, which would hopefully contribute to further progress in nuclear disarmament and non-proliferation.