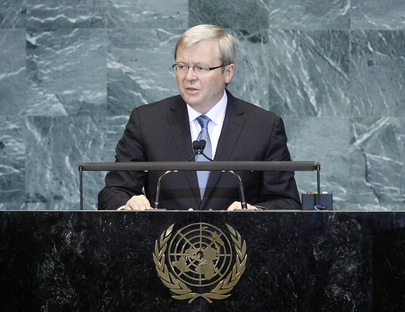 KEVIN RUDD, Minister of Foreign Affairs of Australia, said the increased interdependency of global financial markets meant no economy had been spared from the recent economic crisis.  The radical increase in global people movements, while it had improved well-being, also had amplified a new set of security threats:  pandemic diseases; transnational organized crime; and the continuing threat of global terrorism.  There was also the challenge of climate change, with the unconstrained carbon emissions of one country impacting the survival of all.  Indeed, the United Nations now faced more challenges in an increasingly fragmented, yet global world, which demanded effective global governance systems.  Failure to make the United Nations relevant would eventually lead to the Organization becoming a “hollow shell”, with States increasingly avoiding it to use other mechanisms for obtaining results.

He noted three examples of how the current system was “not meeting expectations” — the Millennium Development Goals, climate change, and the Conference on Disarmament — and said the United Nations had most of the essential structures in place, but for structures to work, political will must be harnessed to enable existing institutions to do their job.  “We must do that which we say,” he said, noting that a conference on disarmament should do just that, “not pretend”.  The actions of a few dissenting States should no longer block the common resolve of the many.  The outlawing of terrorism under relevant Security Council resolutions, together with State measures, reflected unprecedented global collaboration.  Some States had committed their armed forces to Afghanistan, and the result was that it was no longer an unimpeded base for Al-Qaida terrorist operations.

Equal concern centred on nuclear proliferation, he said, with the Democratic People’s Republic of Korea and Iran representing a potential threat to everyone.  Australia supported the United Nations sanctions regime for those two countries and believed they must continue, or possibly be enhanced, in the absence of policy change in those two nations.  He also urged the nine remaining States to ratify the Comprehensive Nuclear-Test-Ban Treaty so it could enter into force.  The report tabled by Australia and Japan in the International Commission on Nuclear Non-proliferation and Disarmament was the most comprehensive blueprint for considering and adopting a nuclear arms control agenda.  Also, Australia looked forward to the prospect of welcoming Palestine as an Assembly member next year.

He urged a fresh approach to responding to natural disaster, as the magnitude of recent events in Pakistan had underlined the need for more cooperation and coordination.  Amid challenges to global economic stability, he said implementing the “Framework for Strong, Sustainable and Balanced Growth” agreed by the G-20 in 2009 was vital.  On climate change, the adaptation needs of the most vulnerable, especially small island developing States, must be addressed and early success must be seen on rainforests, notably through the United Nations Collaborative Initiative on Reducing Emissions from Deforestation and Forest Degradation (REDD+).  Australia fully embraced the Millennium Development Goals and would continue to prioritize the needs of small island developing States, especially its neighbours.  It would invest $1.6 billion in women’s health by 2015 and looked forward working with UN Women.  Australia was a founding member of the United Nations and a candidate for the Security Council, contributed 65,000 citizens to 52 peacekeeping operations, and was the twelfth-largest funding source for the United Nations budget.  Australia had been committed to the United Nations since the beginning.  It was imperfect, but that meant its Member States must “work to make it better”.