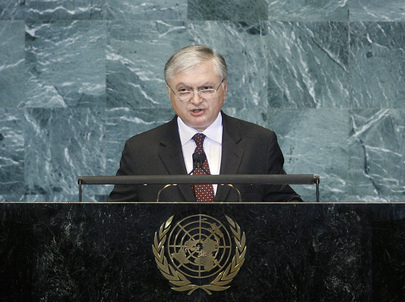 EDWARD NALBANDIAN, Minister of Foreign Affairs of the Republic of Armenia, touching upon the conflict between Azerbaijan and Nagorno-Karabakh, said that the people of the latter had exercised their right to self-determination two decades ago.  They fought for their right to freedom and withstood the brutal war unleashed by Azerbaijan that was suppressing them for 70 years to attempt to cleanse them from their homes.  The Nagorno-Karabakh peace process moved forward with the internationally mandated mediation of the OSCE Minsk Group of Co-Chairs, which continued efforts to peacefully settle the conflict based on the fundamental principles of international law, non-use of force or threat of force, equal rights and self-determination of peoples, and territorial integrity.

Unfortunately, he said that Azerbaijan was attempting to turn the negotiations process upside down, and to distort the nature of the conflict in various international platforms.  Unabated war rhetoric, increased violations of the ceasefire regime, and the unprecedented increase of the military budget of Azerbaijan only exacerbated the situation.  Azerbaijan should not shift the settlement process to formats and frameworks other than the Minsk Group.  He went on to mention the thousands of medieval sculptures destroyed by Azerbaijan between 1998 and 2005.  The International Council on Monuments and Sites said of those giant sculptures, “This heritage that once enjoyed its worthy place among the treasures of the world’s heritage” could no longer be transmitted to future generations.

He further said that Armenia’s initiative  for the normalization of relations with Turkey without any preconditions was fully supported by the international community, and Armenia had made a confident investment in a durable rapprochement while Turkey, unfortunately, had backtracked from its commitments and returned to its initial language of preconditions.  Consequently, up until now the Armenian-Turkish border continued to remain the only closed border in Europe.  Armenia would be ready to move forward when Turkey was once again prepared to normalize relations without preconditions.

As a nation, Armenia had survived the most heinous crime against humanity — the genocide of 95 years ago — and attached the utmost importance to the advancement of all international efforts aimed to prevent genocide and crimes against humanity.  It was encouraging that further discussions on the Secretary-General’s report on “Early warning, assessment and the responsibility to protect” were undertaken within the General Assembly to come up with a formula that would allow a timely and coherent preventative response to genocide, war crimes, and crimes against humanity.