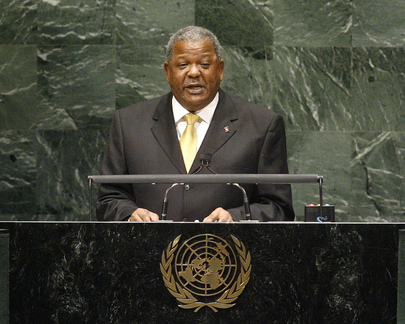 BALDWIN SPENCER, Minister of Foreign Affairs of Antigua and Barbuda, said that among the most enduring lessons over the past 65 years had been the wisdom and supremacy of multilateralism. Even where multilateralism had failed to secure lasting solutions to some of the world’s problems, it had laid a foundation upon which bilateral understanding could be built. For example, the conflict in the Middle East had long eluded the international community. That was why he was hopeful that at latest efforts being brokered by the United States Administration. If there was to be lasting peace, there must be two States. There must be direct negotiations and Israel must heed the international community’s unanimous call to extend the moratorium on disputed settlements.

He said that global governance related, not only to concerns about peace, security and political self-determination, but also to goals of eliminating hunger, disease and ignorance, administering a stable international financial system and preserving the environment. The United Nations, with its near-universal membership, was the only global body with the legitimacy and operational structures able to undertake the task of forging the necessary political and economic consensus to effectively tackle those challenges.

The consequences of climate change facing his country and others included the loss of agricultural land and infrastructure, losses in biodiversity, saltwater intrusion and the devastation of wetland habitats and human settlements, he said. Abundant financing to address those problems had been promised, but had yet to arrive. Emissions promises had also been broken. For its part, Antigua and Barbuda had pledged to reduce emissions by 25 per cent below 1990 levels by 2020. He called on all countries, developed and developing, to similarly pledge real emissions reduction targets. The tragic consequences of natural disasters in Haiti, Chile and Pakistan only reaffirmed the need to ensure that addressing the humanitarian aspects of emergencies remained a United Nations priority.

He said that the Latin America and the Caribbean region was taking bold steps to overcome economic and social vulnerabilities by forging partnerships and creating an economic union by 2011. Economic challenges in the hemisphere were too many and their implications were too grave for the region to exclude any one country. Cuba would always remain a vibrant participant in any regional economic community, and he called on the United States to immediately end its embargo against Cuba. He also condemned anti-democratic moves, such as the recent coup in Honduras, calling on the unconditional return of former President Manuel Zelaya.

In a review of the Millennium Development Goals, he said a renewed emphasis on trade was a critical pillar, and it was essential that all participants in the global trading system adhere to international agreements. If not, people of small developing countries would put no faith in the global system. Trade was an engine of growth, and the Doha Round should be wrapped up to ensure a balanced outcome. For Antigua and Barbuda and other countries, debt relief was another top priority, as was addressing economy recovery after the current global crisis. He called on the Group of 7 (G-7), the G-20, the International Monetary Fund (IMF) and the World Bank in their bilateral and multilateral commitments to the Caribbean, to give a more favourable response to the New Arrangement to Borrow, with a focus on the G-20 agreement of 2 April.

He called on the General Assembly session to develop modalities that would enable the United Nations to resolve conflicts, promote peace and stability, foster a more prosperous world through balanced growth, encourage all Member States to pursue a cleaner, greener, more sustainable world for children and create a world free of nuclear weapons.