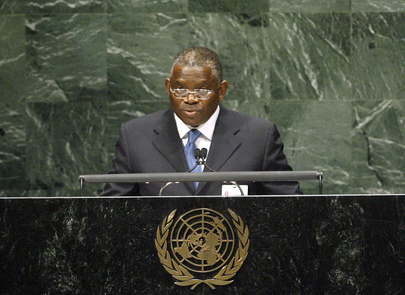 GEORGES REBELO CHIKOTI, Secretary of State for External Relations of Angola, said the issues that the Assembly President had pinpointed as priorities for the session — climate change, the Millennium Development Goals, food security, sustainable development, strengthening fragile States in post-conflict situations, humanitarian aid and disarmament — must remain priorities on the national and international agenda. Backing multilateralism as the best way to resolve today’s complex challenges, Angola emphasized political coordination and stronger relations with the organs of the United Nations system, as well as the regional and subregional organizations to which it belonged, such as the African Union, the Southern African Development Community (SADC), the Economic Community of Central African States (ECCAS) and the Commission of the Gulf of Guinea. The member States of the Commission, based in Angola, managed potential conflicts linked to sea borders, oversaw the management of shared maritime resources and coordinated polices to prevent sea trafficking and piracy. By doing so, it provided security to a region that produced more than 15 per cent of the world’s oil.

He said that the Angolan Armed Forces were a stabilizing factor in the country and the southern and central regions of Africa, and were a part of the early warning mechanisms of SADC and ECCAS. For that reason, Angola was surprised to learn that an upcoming report, intended for circulation as a document of the High Commissioner for Human Rights, mentioned the Angolan Armed Forces involvement in alleged acts of human right violations in the Democratic Republic of the Congo. That document had been produced at the initiative of an agency of the Secretariat, with no specific mandate from the Secretary-General or Member States. Angola and the Angolan Armed Forces continued to act responsibly, based on international standards and scrupulous respect for human rights.

Concerned with the economic, commercial and financial blockade against Cuba, he reiterated Angola’s appeal to lift a measure that the Assembly had repeatedly demanded be removed, in successive resolutions. After three decades of war and political instability, Angola was entering a new cycle, marked by the adoption of a new Constitution, which had created a democratic State and the rule of law. “We are aware that we still have a long way to go, especially taking into account all the time lost and delays accumulated in several areas.” The progress had been achieved through the efforts of the Angolan executive organs and a commitment to improve the human development indexes. After eight years of peace, Angola had implemented economic and social reform policies, which revitalized its economy and rehabilitated key parts of its infrastructure. The country’s annual growth rate had increased by double digits and improved the basic indicators of the Goals. For example, since 2002, more than 2 million children had been enrolled in primary education and the percentage of children attending school had increased sharply to 76 per cent.