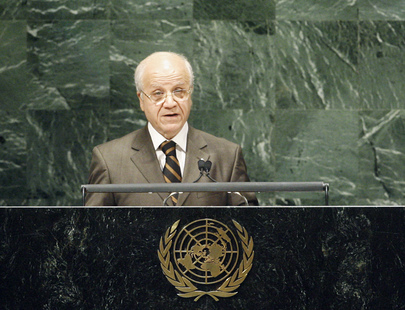 MOURAD MEDELCI, Minister for Foreign Affairs of Algeria, said that the world continued to suffer the aftermath of the global financial crisis. The measures that had been adopted to address that crisis, so far, had made his country believe that best path for preventing such crises lay in rethinking global economic governance, in order to create a system that left no room for market speculation. Turning to the issue of development assistance, he said it was important for the international community to respect its commitments regarding such assistance, particularly to African countries. The international community should provide financial assistance to those countries to enable them to achieve development targets. Some possibilities that could help achieve that goal included implementing a debt moratorium for developing countries, and allowing easier access to the markets of developed countries for products from developing countries.

On climate change, he said that, possibly because of that phenomenon, the world had witnessed natural disasters that had plunged Pakistan, the Russian Federation and other countries into mourning. The situation called for the restructuring of international priorities. Because of its commitment to solidarity and humanitarianism, Algeria was launching an appeal focusing on ways to strengthen the universal management of natural disasters.

Countries like Algeria, which did not have nuclear weapons, had a right to ask nuclear-weapon countries to work towards nuclear disarmament, he continued. In order to rise to the multiple challenges in the area of nuclear international peace, it was necessary that the Conference on Disarmament make the most of the international context generated by the last Treaty on the Non-Proliferation of Nuclear Weapons Review Conference. Algeria continued to be committed to the relaunching of the work of the Conference on Disarmament. The contents of the work programme that had been adopted by the Conference were still valid and should form the basis for its resumed work. Algeria also believed that challenges in the area of peace and security were also linked to exacerbation of terrorism, hostage taking, arms and drug trafficking. Further, Algeria invited the international community to take action to prevent satellite images from being misused. New international laws were needed to address that issue. His country had also originated several initiatives aimed at promoting regional cooperation, including cooperation among States in the Maghreb. In that regard, it had launched economic and social programmes that were Maghreb-wide, in order to encourage regional cooperation.

He reiterated the call to the international community to ensure fairness and coherence with regard to efforts to end conflicts. A definitive solution to the Middle East conflict lay in the implementation of the Arab Peace initiative. Algeria expressed its friendship and support to the Palestinian people and called for an immediate halt to settlement building and for the adoption of a peace agreement, that included a return of land to the Palestinians based on the pre-1967 border and the return of refugees. Noting that there were still non-autonomous States, he said that Algeria was willing to provide full support to United Nations efforts to resolve the Western Sahara conflict. His country believed that there was a need to take into account the human rights dimension of that conflict, which meant that the Human Rights Council should be involved. Algeria also rejected the imposition of extraterritorial laws against developing countries. In that regard, he called for an end to the economic, commercial and other embargoes that had been imposed against Cuba for more than half a century.