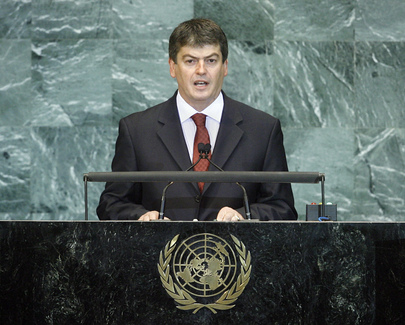 BAMIR TOPI, President of Albania, said that, in an interconnected and interdependent global world, multilateralism remained a priority for the international community. In that regard, a reformed and revitalized United Nations was necessary and irreplaceable in “the complicated process of global governance”. He urged that the focus be on strengthening peace and security, the fight against terrorism, climate change and on the reduction of poverty, among others, and he stressed that his country would remain committed to contributing to the Organization’s agenda.

Albania was also fully committed to reaching the European Union’s goals of “Acquis Communautair”, a process that would be accompanied by constructing Government systems and development capacities, he said. Also, Albania, a member of the North Atlantic Treaty Organization (NATO), with internal democratic stability, was seeking a growing international presence, as a condition of long-term development. Further, “Delivering as One” was a crucial factor of the reform to assist the development of countries. Albania, as a pilot country, had from the first day engaged fully in the system of all-inclusive coherence of the United Nations, in full accordance with national sovereignty, the national ownership of development and by responding to the needs of its people.

Continuing, he informed the Assembly of Albania’s signing the Memorandum of Understanding with the Department of Peacekeeping Operations, which, as a NATO member, was essential to its policy of good neighbourly relationships, the preservation and strengthening of stability in the region and the stability and peace in other parts of the world. His country had participated in the United Nations Mission in the Central African Republic and Chad (MINURCAT), as well as in Afghanistan and Iraq, and was prepared and willing to contribute in other parts of the world in need of such support.

The Alliance of Civilizations was, in his view, a political means of the United Nations to promote peace and harmony, and to build an all-inclusive society through education, understanding and mutual knowledge. As members of the “group of friends” he reaffirmed his country’s commitment to that process, which had been enriched by the Inter-Religious Forum in Tirana in January 2010.

Albania’s membership and integration into the European Union, an important and regional process, would also imply full integration of the region. “These are hopeful and promising times as the bitter past of this part of Europe will remain only as history,” he stated. Concluding, he offered his gratitude for all the international efforts regarding the approval of the resolution on the international legitimacy of the proclamation of Kosovo’s independence. Now that the matter of the status of Kosovo and its borders belonged to the past, it became relevant to begin a dialogue on practical issues. He hoped that the message sanctioned in the resolution would be put immediately to practice by the two independent countries. “We support the dialogue between Kosovo and Serbia, which should start at once.” He appealed to the Member States who had not yet recognized the independence of Kosovo to do so, as it ensured and contributed to long-term stability and peace, not just regionally, but globally.