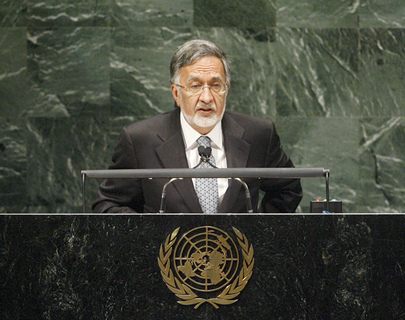 ZALMAI RASSOUL, Minister for Foreign Affairs of Afghanistan, said that after 65 years, the United Nations remained as relevant today as ever before. But commitment was needed to overcome the tragedies of hunger, war and poverty. Afghanistan remained deeply committed to meeting the Millennium Goals, amid enormous challenges. Terrorism and extremism existed beyond its borders of Afghanistan, which were continuously infiltrated by armed adversaries. In the region, terrorism was a growing threat to world peace. If international partners and allies wanted to win the global war on terrorism, they must look beyond the villages of Afghanistan. That global challenge could only be defeated by a concerted effort. His Government was committed to cooperating with others to stamp out that scourge.

He said he recognized that development depended on achieving sustainable peace in Afghanistan. A national body comprised of women, civil society and government had been established and was working towards peacebuilding. Despite successes, obstacles remained to achieve a better life for the Afghan people. Building on commitments made on London and Kabul, he was convinced terrorism and extremism would be eliminated. As demonstrated by the recent parliamentary elections, the people of Afghanistan were steadfast in their commitment to democracy. Afghanistan was also committed to working with its neighbours to combat drug trafficking. Natural disasters emphasized the need for a concerted response. Flooding in Pakistan put enormous strains on his country and others.

Regional business development initiatives, including a gas line and electricity projects, were helping to bolster economic development in the area, he said. His country stood ready to intensify cooperation with neighbours on economic, political and criminal issues. The Afghan people would never forget the international community or the partnerships that ensured peace and stability in Afghanistan.