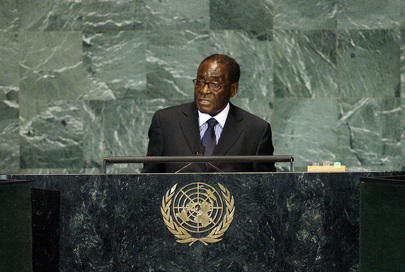 ROBERT MUGABE, President of Zimbabwe, recalled that his Government, through the years, had underlined the need for the United Nations to truly serve the interest of all States. It was his unchanged belief that all global bodies should abide by the universal principles that underlie multilateral decision-making processes, particularly that of equality among States and the right to development. He hoped to have a candid and holistic debate on the global responses to today's crises.
Noting that Zimbabwe supported revitalization of the General Assembly to make it more effective, he said that, as the United Nations's pre-eminent, deliberative and policymaking body, it should play a more active role in mobilizing action against such challenges as peace and security, the financial and economic crisis, economic and social development and climate change. He was greatly concerned at the encroachment of other United Nations bodies on the Assembly's work, and thus, reiterated the need to strengthen accountability of all the Organization's principal and subsidiary organs.
He expressed hope that negotiations on Security Council reform would break the deadlock that had prevented progress in an area of strategic interest for Africa. Reform was "imperative" if the Council was to ensure successful implementation of its mandate to maintain international peace and security. That Africa remained underrepresented and without a permanent seat was a serious and antiquated anomaly, whose time for address was overdue. It was clearly a violation of the principle and practice of democracy in international relations. Council reform should urgently take full notice of Africa's position, which demanded two permanent seats, with complete veto power, plus two additional non-permanent seats.
Continuing, he said the devastating effects of the financial and economic crisis had exposed the "folly" of leaving management of the global economy in the hands of a few self-appointed countries. He fully supported the creation of a follow-up working group under the Assembly's aegis, saying it should reach an early agreement on immediate international policy actions to support developing countries, including a global stimulus plan.
Such measures, however, would not achieve desired goals without comprehensive reform of the Bretton Woods institutions, which should include representation of sub-Saharan Africa on their Executive Boards. While pleased that the International Monetary Fund had finalized the reallocation of Special Drawing Rights on the basis of the $250 billion pledged by the Group of Twenty (G-20), he regretted that only $18 billion of those funds had been allocated to low-income countries. Developed countries, which had caused the crisis, received the lion's share.
On food security, he reiterated his call for a substantial increase in investment in agriculture in developing countries, and it was critical that provisions of agricultural inputs -- seeds, fertilizers and chemicals -- be available to small-scale farmers, particularly women. As such, he called for channelling support towards agriculture, which had "dwindled" in recent decades, and for developed countries to lift or reduce agricultural subsides and open their markets to developing nations.
Turning to the area of health, he said efforts to reduce maternal and child morality, and combat HIV/AIDS, among other diseases, had fallen short of targets. While Zimbabwe had made great strides in its fight against HIV/AIDS -- with a drop in the adult prevalence rate to 11 per cent this year, from 20 per cent in 2000 --the global community, in cooperation with pharmaceutical companies, had to assist in increasing access of affordable essential drugs. For sub-Saharan Africa, malaria also presented a formidable challenge and he urged strengthening national and international commitments to eradicate that scourge.
Welcoming renewed "enthusiasm" of the Russian Federation and the United States to pursue a nuclear-free world, he urged other nuclear-weapons States to do the same. Zimbabwe had chaired the Third Preparatory Committee for the 2010 Nuclear Non-Proliferation Treaty Review Conference and was hopeful that, having secured agreement on the Conference agenda, members would produce renewed commitment to the three pillars of the Nuclear Non-Proliferation Treaty: nuclear disarmament; non-proliferation; and peaceful use of nuclear energy.
Describing developments in his country, he said that since its formation in February, the inclusive Government had expressed an unwavering commitment to chart a "new vision" for the country and improve people's lives. Priorities included the maintenance of peace and stability, pursuit of economic recovery and development, promotion of human rights and improvement of conditions for women and children. However, while Southern African Development Community (SADC) countries had given Zimbabwe financial and other support when it too had been reeling from the effects of global crisis, the United States and European Union imposed illegal sanctions against his country and refused to remove them. "What are their motives?" he asked.
Similarly, he called for an immediate end to the coercive and illegal 50-year embargo against Cuba, which had lost an estimated $96 billion. He joined the Non-Aligned Movement in its condemnation of the use of coercive measures as a violation of international law and international relations. In closing, he reiterated the need for effective multilateralism to promote global partnership for peace and development. The United Nations and other international bodies should play a lead role in directing the course of events, taking into account the interests of the majority of its members. He expressed hope that through unity, solidarity and cooperation, the challenges could be addressed. "Let us rise to the occasion," he said.