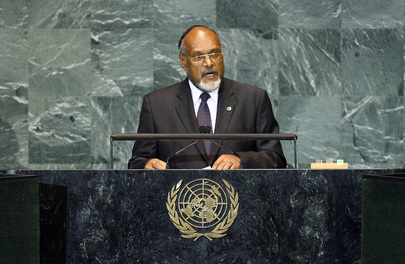 EDWARD NIPAKE NATAPEI, Prime Minister of Vanuatu, said that one of the major goals of his country’s comprehensive reform programme, introduced in the 1990s, was to promote social equity, especially in terms of integrating the needs of its culturally diverse people and geographically remote communities into the national development priorities.  Despite high levels of development assistance, economic performance of the island nation remained weak.  Concerned that recent high economic growth would fall sharply as a result of the global economic recession, Vanuatu would host a Pacific United Nations Conference on the Human Face of the Global Economic Crisis in the Pacific in February 2010.
The complex and challenging circumstances in Fiji had led to international condemnation and pressure, he said, noting that, while his country was part of the regional desire to see an early return to democracy there, continuing international engagement with the Government of Fiji would be critical.  The Melanesian Spearhead Group had continued to maintain a high-level dialogue with the Fijian Government.  The processes of returning the country to democracy should be driven by peaceful dialogue and concern for the socio-economic well-being of Fiji’s people.  Any punitive measures would not be in their economic and social interests or for the region as a whole.
Challenges such as climate change posed unacceptable implications for the social, economic and political structures of small island States, and often had grave security implications.  General Assembly resolution 63/281 had been a historical milestone for Pacific small island developing States because the security implications of climate change had been brought to the attention of the international community.  “No country, small or large, developed or developing, will be able to avoid the security implications of climate change, which are already affecting the livelihoods of our people as the international community struggles to come to terms with the idea that climate change poses a real threat to the future survival of mankind,” he said, adding that the word “doomed” best described that particular global crisis.
He said Vanuatu was being hurt by the global economic and financial crisis, through, among other things, falling trade, erratic commodity prices, increased borrowing costs and strains on official development assistance (ODA).  It was a matter of concern that the crisis had been caused by outside forces, yet its rippling effects were quickly reaching Vanuatu’s most vulnerable population; children, the disabled and the working poor.
Turning to reform of the United Nations, he said that in order to ensure a stronger and more effective Organization, there was a need to review the Security Council membership, sooner rather than later.  A better geographical representation would give the underrepresented groups of Member States a stronger sense of responsibility and responsiveness.  Negotiations on the matter should be conducted in an atmosphere of mutually constructive dialogue and positive engagement.  Elsewhere in the Organization, he noted that the often highly bureaucratic procedures and mechanisms established by the United Nations system for accessing much-needed funds had placed unnecessary strains on local capacities.  There was a need to identify ways of simplifying the procedures, including by exploring possibilities for direct access.