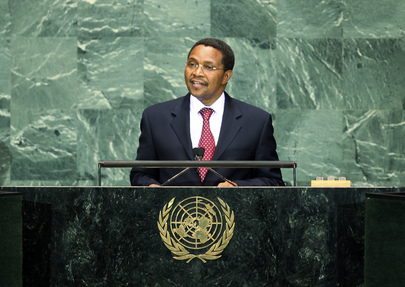 JAKAYA MRISHO KIKWETE, President of United Republic of Tanzania, said that a number of East-African countries had been experiencing unprecedented drought.  Agricultural production had been severely affected, causing acute food shortages, as well as shortages of grazing lands and water for livestock.  Rivers were drying up, interrupting hydropower generation.

The United Nations should be aware of the growing danger, which could reach catastrophic proportion if the rain shortage persisted, and consider how to assist now rather than waiting for graphic pictures of emaciated and dying children to dominate the news to act.  Further, he said, concerted efforts by African Governments and donors were required to affect the African “green revolution”, which had been too long in coming.   Africa looked to the United Nations for leadership in that regard.

Turning to the problem of youth and employment in Africa, he said the continent faced one of the world’s biggest job deficit challenges with youth accounting for 37 per cent of the working age population and 60 per cent of the unemployed.  In some nations, youth unemployment was up to 80 per cent.  A constantly rising number of young Africans were entering a labour market that was not expanding as fast.  Beyond any economic costs, that carried a high social price.

Those young people threatened to become petrol for many of the fires raging across the continent.  Creating opportunities for these youth was a challenge African States could not tackle alone.  The Danish Government had, in April 2008, formed a Commission for Africa to address the challenge.  He asked for the Commission’s report to be transmitted to the Assembly and proposed that it consider dedicating a decade to focus on youth unemployment for the 2011-2020.

He said it was a matter of “great comfort and pride” that, except for a few hot spots -- particularly in Somalia and to some extent in Darfur -- peace reigned in most of Africa.   Eastern Democratic Republic of the Congo was calm.   Burundi was enjoying peace after many years of civil war and instability.  That situation had facilitated the return of many refugees from the United Republic of Tanzania.  Meanwhile more than 160,000 refugees had chosen to remain there and were applying for citizenship.  The Government had accepted their citizenship requests in principle and was finalizing the procedures for granting it.  However, they would be moved from refugee camps and resettled elsewhere in order to discourage the refugee mentality among them, as well as among their fellow Tanzanians.  The support of the United Nations would be needed in that very expensive exercise.

Concluding, he underlined his country’s commitment to peace in Africa and the world.  It was ready to do more to train and deploy peacekeepers as requested.  He called on the Security Council to expedite the process of giving the people of Western Sahara the opportunity to decide their future status.  Meanwhile, any reform in the Council must include Africa’s being granted two permanent seats.  The international community’s support was critical to the African Union’s position regarding unconstitutional changes of Government.  Any decision that ran contrary to that undermined the African Union’s good intentions, he added.