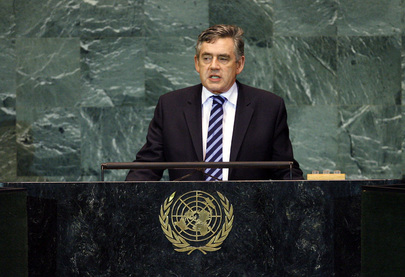 GORDON BROWN, Prime Minister of the United Kingdom, said that, when the Assembly’s general debate had gotten under way last year, the world was on the brink of a global crisis, and the full scale of the dangers posed by the prospect of a collapse of the world banking system, a crippling loss of jobs and frozen credit were just becoming clear.  As never before, the fate of each country rested in the hands of all, and as the fear of the unthinkable had begun to take hold, the international community had come together, through the G-20, to fight back against global recession.

“So today, we can draw on strength from the unprecedented unity that has defined the past year -- but we cannot be complacent,” he said, highlighting five current challenges -- climate change, terrorism, nuclear proliferation, poverty and shared prosperity –- that demanded swift and concerted action.  Once again the world was on the brink, and if momentous decisions were not made, the next six months might prove even more challenging than the last.

He said that if the international community did not reach a real agreement at Copenhagen on climate change, “we cannot hope for a second chance some time in the future”.  Indeed, now was the time to limit and reverse the climate change that was being inflicted on present and future generations.  At the same time, he stressed that progress in Copenhagen was not certain, because a solid climate change deal required money.  Moreover, if the poorest were going to adapt, richer countries must contribute financially.

He also proposed an additional flow of financing action against climate change, from the public and private sectors, of around $100 billion a year by 2020. In addition, a post-Kyoto Protocol agreement on climate change at Copenhagen would be the next test of global cooperation.

On Afghanistan, he said that if the international community gave way to the insurgency, Al-Qaida and other terrorist groups would return and, from that sanctuary, plot, train and launch attacks on the world.  A safer Afghanistan meant a safer world, but “none of us can be safe if we walk away from that country”.  He added that the international community must unite against every source of terror and injustice in the world, mentioning violence in Somalia and Sudan, the conflict in Israel and Palestine, and the fact that Burma’s elected leader was incarcerated.

He went on to say that there could be no chance of a nuclear-free world if Iran was allowed to develop nuclear weapons and set off a new arms race.  On other matters, he said that, if the international community did not follow through on coordinated global fiscal expansion, there would be no global compact for jobs and growth.  Further, failing to fight preventable illness would leave some 12,000 children dead in Africa each day.

He reiterated that proliferation was a real threat, in light of the fact that there were now nine nuclear-armed countries.  He said the world was at a moment of danger, and added that Iran and the Democratic People’s Republic of Korea must know the world would be even tougher on proliferation and consider further sanctions.

Finally, he said the financial crisis had revealed the need for comprehensive reform and a “compact for jobs and growth” to bring rising prosperity, with stimulus measures.  More important was to make sure the recovery did not falter, and that “we do not turn off life-support for the economy prematurely”.  The financial crisis had devastated Africa, and therefore, recovery was needed and an assurance that the Millennium Development Goals did not fall beyond reach.