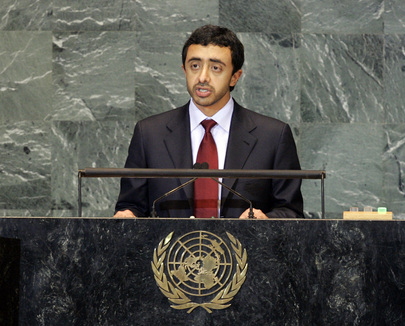 ABDULLAH BIN ZAYED AL NAHYAN, Minister of Foreign Affairs of the United Arab Emirates, expressed pride that Masdar City in Abu Dhabi had been selected as a seat for the International Renewable Energy Agency and announced his country’s renewed commitment and readiness to cooperate fully in providing facilities and technical resources required for the success of that agency.

He stated that his country’s interest in developing a programme for the peaceful uses of nuclear energy stemmed from its desire to meet its growing of energy demand in the future.  By developing a peaceful nuclear energy model which complied with the highest standards of transparency in operating nuclear facilities and fulfilled the highest requirements of nuclear safety and non-proliferation in cooperation with IAEA and other responsible and experienced states, his country hoped that a new course would be charted for the safe use of nuclear energy.  The country’s commitment not to enrich uranium and reprocess fuels locally was among the most salient features of that model.  That model was supported by enhanced international transparency and cooperation mechanisms.

He renewed his country’s disappointment at the continued occupation by Iran of three islands -- Greater Tunb, Lesser Tunb and Abu Musa -- since 1971.  It demanded the return of those islands and said that all military and administrative actions taken by Iran on those islands were null and void and did not have any legal effect, regardless of how long the occupation might have lasted.  The international community should urge Iran to respond to the peaceful and sincere initiatives of his country, which had been supported and adopted by the Gulf Cooperation Council and the League of Arab States.  Those initiatives called for a just settlement, either through direct and serious negotiations between the two countries or by referring the matter to the International Court of Justice.

He noted with satisfaction the gradual withdrawal of foreign troops from Iraq and the expansion of the authority of its Government over all its territory.  His country reaffirmed its long-standing support to the people and Government of Iraq, in particular their efforts to expedite the rebuilding of their security, legislative and economic institutions and achieving national reconciliation.  His country was also deeply concerned at the deteriorating security and humanitarian situation in Iraq and condemned the recent bombings there as acts of terror.  He called for the safeguarding of the Arab and Islamic identity of Iraq and said that he stood against all attempts aimed at dismembering the Iraqi State.

On the peace process in the Middle East, he expressed disappointment that it had deteriorated, due to continued Israeli aggressions against the occupied Palestinian and Arab territories.  Those aggressions included the blockade imposed on the Palestinian people, particularly in Gaza, the continued confiscation of lands, properties and homes of the Palestinian people and the building of further settlements and separation wall in the occupied territories.  He noted with satisfaction the positive positions expressed by United States President Barack Obama at the General Assembly a few days ago.  He believed that that address contained solid foundation for negotiations between the Palestinians and the Israeli Government.  His country expressed the hope that President Obama would continue following up on that important matter.

He emphasized that the achievement of a just, lasting and comprehensive peace in the Middle East required the ending of Israeli occupation of all occupied Arab and Palestinian territories and the establishment of an independent Palestinian State, with Al Quds as its capital, based on the principle of land for peace and in accordance with the Arab Peace Initiative and resolutions of international legitimacy.