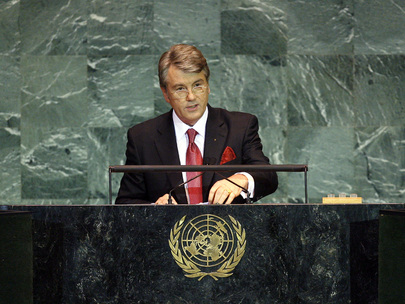 VICTOR YUSHCNENKO, President of Ukraine, said there was an atmosphere of strengthening freedom in his country, and its choice for democracy was irreversible.  As a free nation, Ukraine would not accept any form of interference into the internal affairs of sovereign States, any pressure on them, or any manifestation of authoritarian thinking in international relations.  Most importantly, Ukraine would not accept any violations of fundamental international principles, particularly territorial integrity and the inviolability of the frontiers of all sovereign States.
The Charter entrusted the Security Council with the primary responsibility for maintaining international peace and security, and he confirmed Ukraine’s resolve to become a Council member in 2016-2017.   Ukraine would always be a reliable partner of the United Nations in all peace and security issues and collective actions that fostered stability in all regions, especially Africa.
Nearly 15 years ago, Ukraine had voluntarily given up the world’s third largest nuclear potential and acceded to the Nuclear Non-Proliferation Treaty as a non-nuclear State.  He welcomed steps taken by the Untied States and the Russian Federation to shape a new agreement to replace the Treaty on the Reduction and Limitation of Strategic Offensive Arms of 31 July 1991, which expired this year.  The country strictly abided by Council resolutions and adhered to all established international regimes.
He then turned to the global fight against maritime piracy, which was an important issue for a country with nearly 70,000 citizens employed on ships under foreign flags.  Ukraine valued all efforts of the United Nations and International Maritime Organization in that regard, and he stressed that piracy was a dangerous and threatening problem that impacted all nations.  In the last seven years, pirates had attacked 18 vessels with Ukrainian sailors on board and 35 Ukrainian sailors had been taken hostage in the last nine months.   Ukraine strongly supported the creation of uniform and clear rules to fight pirates and protect sailors.
The global financial crisis was one of the most acute problems facing the international community and it may be time to discuss the creation of a United Nations “Economic Security Council”.  The most important objective of the Organization was for each country to protect common people from the financial crisis and prevent a decline in their living standards, he added.