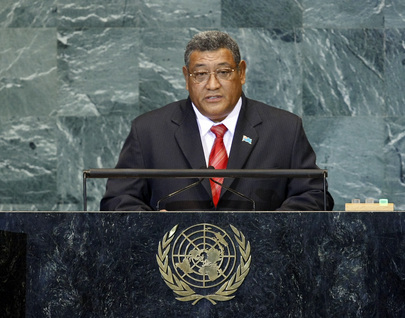 APISAI IELEMIA, Prime Minister and Minister of Foreign Affairs and Labour of Tuvalu, said the global financial and economic crisis loomed over the opening of the Assembly’s sixty-fourth session.  Small island economies like his country’s relied on imports from overseas and had been severely impacted by the crisis.  Indeed, the price of basic food items had risen dramatically.  The people of Tuvalu were suffering from actions not of their making.  This global crisis required the cooperation of all countries.

He said that globalization had left other marks on Tuvalu, particularly in the context of swine flue.  His Government was thankful for the World Health Organization’s “Call to Action”, established to help poorer countries respond to the pandemic.  Such outbreaks highlighted the need for trade reforms in access to medicine.  Indeed, access to affordable medicine was not a right for rich nations only.

Noting that 12 Tuvaluan seafarers had been held captive aboard a German-registered ship off Somalia’s coast for four months, he stressed that the piracy scourge must end.  Tuvalu strongly condemned that inhumane organized crime and urged the United Nations and the international community to bring those pirates to justice through the application of the Principle of Universal Jurisdiction.  He further called on the United Nations to establish a special task force to address piracy.

As the leader of one of the world’s most vulnerable countries to climate change, he had great faith in the upcoming conference in Copenhagen.  There, several milestones must be achieved.  First, the international community must commit to a rapid course of action to reduce greenhouse gases to levels that would ensure that global temperatures did not rise above 1.5° Celsius.  Second, the Kyoto Protocol must not be abandoned as the world worked towards a new agreement.  Rather, it should remain a cornerstone of all action.  Third, serious commitments were needed from key greenhouse-gas-emitting countries.  The United States must take a leadership role and drastically reduce its emissions.  Developing countries with rising economies must also reduce their emissions.  Fourth, strong commitments for financial and other resources to support vulnerable countries were needed.  Finally, it was necessary to reduce emissions from deforestation and forest degradation in developing countries (REDD) in a coherent way.  Carbon markets would not deliver sufficient climate change outcomes, and new funds should be developed.

He went on to say that the various bodies and special events and summits of the United Nations did not sufficiently address the particular vulnerability of certain countries when considering the question of graduation from least developed country status.  Like other least developed countries and small island developing States, Tuvalu’s economic and environmental vulnerability could not be totally ignored, particularly in light of the current economic crisis.  Towards that end, Tuvalu welcomed the decision not to graduate it from the list for the next three years.  But it continued to appeal to the Assembly, the Economic and Social Council and its development partners to reconsider and review the criteria for graduation.  No least developed country that was recognized as highly vulnerable should be forced to lose its status.

He welcomed the progress made on the intergovernmental negotiations towards reforming the Security Council.  Small island developing States should be allocated a seat.  While Tuvalu welcomed the establishment of a long-overdue United Nations joint presence office in Tuvalu in May, it hoped that office would not create another layer of bureaucracy among the Organization’s implementing agencies, but would be more responsive to Tuvaluan needs.  In that context, it was crucial that more concrete development projects be established.  While the long-overdue courtesy of Assembly participation had been granted to Taiwan this year, that country also deserved to participate more fully as a member of the World Health Organization and other specialized United Nations agencies, he added.