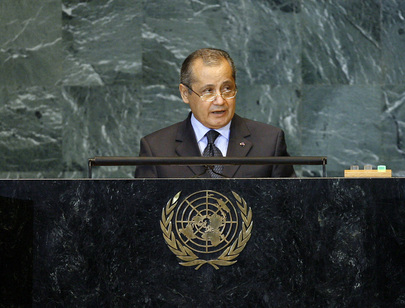 ABDELWAHEB ABDALLAH, Minister of Foreign Affairs of Tunisia, said the world was witnessing deep and rapid changes that had conferred new dimensions upon international relations and altered the balances which had long governed them.  The scientific and technological evolution had brought about considerable progress in a number of fields, reduced distances and improved quality of life.  However, such developments had not put an end to hot spots of tension, nor to the varied conflicts, extremist trends and violence.  Those “disturbing paradoxes” contradicted the foundational values and principles of the United Nations, he said.
He went on to say that the present structure of the United Nations was the outcome of the conditions of its creation more than half a century ago, and no longer reflected the reality of the new world situation.  Thus the process of Organizational reform must be accelerated, particularly with regard to enlarging the Security Council, and making that body more transparent and efficient.  However, he said that, despite its “complex and intermingling character”, the world situation would “only strengthen” the international community’s attachment to the United Nations, since it was more necessary than ever to disseminate the culture of tolerance, dialogue and respect for differences.
Efforts of Tunisia to further the cause of tolerance included the 1995 adoption of the Carthage Charter on Tolerance; Tunisia’s 2001 call for dialogue among civilisations; the creation of the university level of the Ben Ali Chair for dialogue among civilisations and religions; and the adoption of the Kairouan Declaration by the “International Conference on the Dialogue of Civilisations and Cultural Diversity” held in June.
In that regard, he also stressed the importance of constantly listening to the concerns of youth, saying “they are our real wealth”.  He reiterated Tunisian President Zine El Abidine Ben Ali’s call to proclaim 2010 “International Year of the Youth”, including a World Youth Conference to be attended by young people from all parts of the world and to be concluded with the issuing of an International Pact, uniting world youth around common universal values.  He looked forward to the General Assembly’s support for the adoption of such a resolution during its current session.
With regard to the effort to contain terrorism and extremism, he said Tunisia had been one of the first countries to warn against the dangers of this phenomenon since the 1990s, and he renewed the call to convene an international conference under the auspices of the United Nations in order to elaborate a code of conduct to fight terrorism by which all sides would be bound.
He said that conflicts in Africa had devastated the continent and put its development process in jeopardy, slowing its growth and negatively affecting its societies.  He thus called upon the United Nations and the Security Council to support the efforts of the African Union and its Member States, and to stand beside the African peoples to help regain security and stability, and overcome the effects of conflict and war.
For its part, Tunisia had set up an initiative adopted by the General Assembly in 2002 for a World Solidarity Fund aimed at fighting poverty and laying foundations for a solidarity-based development among nations.  He renewed the call to operationalize that fund, so that it could provide assistance to developing nations in general, particularly in Africa.  He further said that Tunisia was keen to strengthen its relations with the European Union, and noted that these relations had witnessed remarkable progress due to both sides’ determination to upgrade their ties to the level of advanced partnership, thus opening wide prospects for enhancing cooperation in all fields and enabling Tunisia to further integrate its regional and international environment.