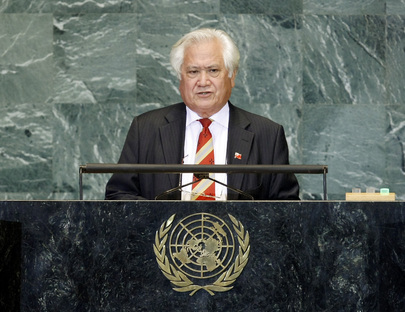 FELETI VAKA’UTA SEVELE, Prime Minister of Tonga, thanked United Nations Secretary-General Ban Ki-Moon for his convening the climate change summit, and noted the impact it had had on Tonga and other vulnerable small island developing States.  Indeed, those countries needed to “reach beyond our narrow national interests and embrace our collective responsibility to each other as nation States and to those States most vulnerable and least able to address the vagaries of climate change”.  That issue had taken its rightful place at the forefront of the debate this week, but those words must be matched by action.  “Our understanding of the truth of climate change must be moved by the honest action to mitigate and change the wasteful energy habits of a lifetime into the productive energy habits of the future.”

Turning to other issues, he said he remained committed to making progress on the achievement of the Millennium Development Goals, which remained a core component of Tonga’s national development planning.  “Much of that progress has been reliant on our own domestic efforts, but has been complemented by our own development partners,” he said, also expressing support for the Secretary-General’s convening of a special summit on the Goals in 2010.

He touched on some of Tonga’s other concerns, including preservation of the sea, saying that, as an island nation, the living and the potential of non-living marine resources of the country’s maritime zones remained critical to its future.  Thus, the country remained in compliance with its obligations under the Law of the Sea, and had lodged a partial submission for consideration by the Commission on the Outer Limits of the Continental Shelf.  Energy was another important issue to Tonga, especially since 100 per cent of its power generation was fuelled by imported fossil fuels.  Thus, the country has been forced to investigate feasible renewable energy sources.  “We have set a target to achieve 50 per cent of our electricity generation utilizing renewable energy sources by 2012,” he said.

Continuing, he said his country had reviewed donor funding to see how to achieve this goal; Tonga’s development partners had agreed to collaborate to assess the current infrastructure.  At the conclusion of the regional Pacific Energy Ministers Meeting, the Tonga Renewable Energy Road Map had been borne.  The blueprint would assess the most suitable renewable energy source utilizing the rapid advances in technology, assess the infrastructure in which the electricity could be generated and distributed, and provide models of systems that could be implemented throughout remote islands.

He noted that Tonga’s parliament had recently considered ratification of the Convention on the Elimination of All Forms of Discrimination against Women, but had voted against ratification because “to do so would cut across our cultural and social heritage that made up our unique Tongan way of life”.  He added that “we did not want to ratify CEDAW [women’s Convention] as a matter of international convenience.  We would rather be judged on our actions of empowerment of women”.