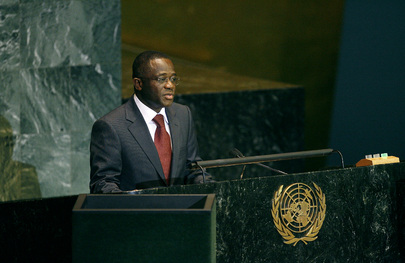 KODJO MENAN ( Togo ) reaffirmed his country’s commitment to peace, security and development, all of which were at the core of the work of the United Nations.  Togo was a part of the Organization’s recent initiatives to mobilize global support for economic, social and cultural change.  He said political, administrative and economic governance was crucial to attaining peace and security, and, without a shadow of a doubt, to speeding up achievement of the Millennium Development Goals.
However, sustainable development would not be possible without a climate of peace and national cohesion, he warned.  In that regard, since 2006, the Government of Togo had taken measures to promote democracy and reinforce poverty reduction programmes.  Global agreements and agreements with the European Union had allowed the country to carry out free and democratic legislative elections in 2007.  Togo had also taken steps towards constitutional reform, namely within the National Commission for Human Rights.
Continuing, he said there had been huge initiatives to revamp the judiciary sector in order to bring the administration and the people closer together.  Government measures to ensure freedom of expression demonstrated this.  As a mark of respect for human rights the Government had also put forward a bill to abolish the death penalty, which was adopted in June 2009.
The Government had also taken measures to improve the health and education sector, having earmarked significant funds towards health reforms for 2009-2013.  To revive a deteriorating, cash-strapped education sector, it had committed to putting in place a plan to allow the country to integrate a fast track “education for all” plan by 2010.  In terms of economic reform, Togo had taken appropriate steps to streamline public spending and to create a favourable climate for business and foreign investment.  He took the opportunity to call on bilateral and multilateral partners to help Togo get its social and economic plans off the ground.
He said terrorism, which hindered peace and sustainable development, was a scourge that had to be fought through better, universalized, international legal measures.  The illegal flow of drugs along the West African coastline posed a real threat and destabilized the region.  Given the scope of the scourge, one country alone could not eradicate it.  Togo thus called for international support to help restore a secure climate that was vital for development to prevail.  Despite its limited resources, Togo had been ruthless in weeding out the plague of drug traffickers, with neighbouring support.
Two decades of economic stagnation had caused new challenges, namely food, financial and environmental crises.  To alleviate the effects of the financial shock, it was necessary to put in place policies that would increase agricultural and energetic production among developing countries.  To quell the resurgence of such crises, he urged for a joint global initiative to consider restructuring the economic system.  In that regard, he praised the G-20 pledge to boost global business, by earmarking $50 billion for Africa from 2009-2011, as well as the African Development Bank’s initiative to fund businesses in Africa with more than $500 million.