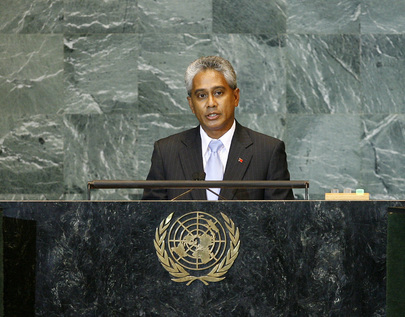 ZACARIAS ALBANO DA COSTA, Minister for Foreign Affairs, Timor-Leste, said 2009 was an important milestone for Timor-Leste, which had attained full sovereignty seven years ago and had begun the process of nation-building.  “Timor-Leste has been showcased both as a success story of the United Nations and been hastily characterized by some as a failed State,” he said, and added that he didn’t want to argue with either view but describe his country today and how it has situated itself in the community of nations.
He went on to say that Timor-Leste had benefited greatly from the engagement with the United Nations, and praised the leadership of the late Sergio Vieira de Mello, who had served as the United Nations Transitional Administrator in East Timor from December 1999 to May 2002, but asked the question:  “Could the United Nations have done things differently in those earlier and subsequent years, and how can we best use this partnership to move forward?”
On lessons learned, he said that it had taken time to build national capacities and sustainable institutions, and that it was a balance act between peace, justice and reconciliation.  There had been as many as 3,000 evaluations and studies of Timor-Leste and the United Nations work there, and he proposed yet another one -- conducted by the country itself.  There was a need for long-term engagement by the United Nations, as evidenced by the resurging violence of 2006, but he added that the Government had continued to make strides toward peace and stability, reintegrating internally displaced persons and stopping gang violence.
With regard to its relation with Indonesia, he said:  “We cannot deny, or undo, what has happened in our common past, but we are determined to reconcile that past, because we know we can progress and do much better for the future.”  On the subject of justice, he said his country’s Constitution guaranteed the rule of law and that it was his Government’s aim to further strengthen the justice system.
Finally, turning to climate change, he said that his country was not under threat by rising waters but was nonetheless affected by other impacts of that phenomenon, including changing weather patterns.  He closed by expressing his gratitude to the United Nations and his country’s international partners for their continued support.  “We stand resolutely with you in contributing to solutions to our collective challenges and are resolved to solving our own national challenges.”