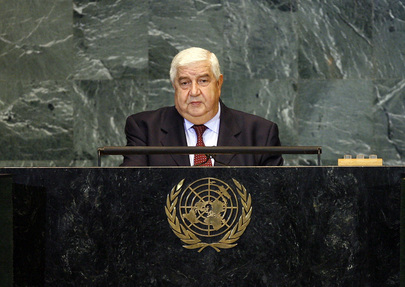 WALID AL-MOUALEM, Minister for Foreign Affairs of Syria, said that the Middle East was among the most tension-ridden regions of the world, and the situation there remained “ominous”.  Despite calls for comprehensive solutions, “paying lip service” to the need for peace was categorically different from working towards that goal.  He said that Israel had “no qualms” about committing internationally forbidden acts and breaching international law, as it had been encouraged and protected by the previous Administration in Washington.
He said Israel continued to lay a “stifling siege” to Gaza in contravention of the most rudimentary humanitarian principles and tenets of international law.  He pointed to the recent report or the United Nations Fact-Finding Mission on Gaza, saying that it had found Israel to have committed “grave violations” of international law, including war crimes and possible crimes against humanity.
While the new reprioritization of the problem in the Middle East was reassuring, the engagement by the new United States Administration, members of the Security Council, the European Union, the Organization for Islamic Conference (OIC), and the Non-Aligned Movement had been continuously countered by Israeli measures and positions that ignored rudimentary “givens” of the peace process.  He said Israel had refused to freeze illegitimate settlement building and by so doing was in breach of its obligations under international law.  Moreover, Israel continued to confiscate Palestinian lands, build its “apartheid wall”, and expel inhabitants from their homes.
Continuing that thread, he stressed that peace and occupation could not coexist.  Syria sought a strategic peace based on Security Council resolutions 242 (1967) and 338 (1973).  To that end, he said Syria had entered into indirect talks with Israel through Turkish mediators and sought to arrive at a common ground that would ultimately enable the launch of direct negotiations.  However, the absence of genuine political will to make peace, and Israel’s “war of aggression” waged against Gaza earlier in the year, had brought this pursuit to a halt.
He went on to say that Iraq “continued to bleed”, and that safeguarding that country’s independence and Arab-Islamic identity was a serious concern.  It was, therefore, urgent to build Iraqi unity based on national reconciliation that included “Iraqis of all stripes”.  Syria continuously condemned all terrorist acts claiming the lives of innocent victims in Iraq, and called for the withdrawal of all foreign troops, and for the restoration of full independence and sovereignty. He said Syria was dedicated to strengthening bilateral Syrian-Iraqi relations.
While strongly condemning the recent “Bloody Wednesday” terrorist bombings in Iraq, he said he had been surprised to hear accusations levelled that Syria had harboured those responsible, calling these allegations both extremely unfortunate and devoid of any truth.  Syria was open to all suggestions aimed at solving the current crisis, and had demanded that real evidence be made available to substantiate the claims.  However, no such evidence had been put forward.
With regards to the economic and financial crisis, he said answers must be sought that consecrated sound practices and remedied systemic imbalances that were bound to affect all in a globalized world.  As for climate change, he said it was the responsibility of rich States to provide all forms of support to poorer countries, as they had earned such support.  He also called for a larger participation by developing countries in the work of the G-20, so as to allow them to advance proposals to overcome the crisis.