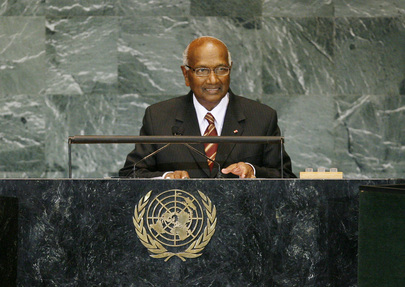 RAMDIEN SARDJOE, Vice-President of Suriname, enumerated the traditional and new challenges facing the global community, including pervasive poverty, deadly disease, increased frequency and intensity of natural disasters and environmental degradation.  Added to them were the energy, food, financial and economic crises, he said.  Current challenges transcended national borders and required concerted action and responses from the international community.  The United Nations was, therefore, the central forum for addressing global issues and he called for effective multilateralism -- not as an option, but as a necessity.  United Nations reform, including meaningful reform of the Security Council, was indispensable towards that end.  Equally important was strengthened cooperation within and between regional groups, as well as between those groups and the United Nations.

The same multilateral engagement was needed to address climate change, he said, as had been demonstrated in such areas as the fight against the uncontrolled spread of illicit small arms and light weapons; the fight against international terrorism; HIV/AIDS; peacekeeping and peacebuilding; the advancement of women; and human rights.  The upcoming Conference in Copenhagen must produce an agreement with ambitious mitigation and adaptation targets.  Countries that were historically responsible for the emissions of the current amount of greenhouse gases should take the lead in that regard.  Appropriate mitigation efforts must also be undertaken by developing countries.

Suriname continued efforts to manage its forests in a sustainable manner with the aim of maintaining and improving the climate stabilizing value of its standing forest, he continued.  A future forest carbon-mitigation regime should provide incentives to high-forest low-deforestation countries.  Referring to the report of the informal working group on interim finance for Reducing Emissions from Deforestation and Forest Degradation (REDD), he noted that it estimated that financing of €15 billion to €25 billion for the 2010-2015 period for REDD+ efforts could produce a 25 per cent reduction in annual global deforestation rates by 2015.  He called upon Member States to support REDD+.

He emphasized the importance of full implementation of the Global Agenda for Dialogue among Civilizations Programme of Action and of the Declaration and Programme of Action on the Culture of Peace.  His own democracy, he said, where diverse ethnic groups from different multi-cultural backgrounds and religious traditions had come a long way towards cooperating harmoniously and peacefully, could serve as an example in the quest for peace, security and development.  In the atmosphere of democratic values and high levels of religious and ethnic tolerance, Suriname was building a society that could prosper and engage with the region and the world.  “Only with mutual trust and understanding will we be able to overcome international tensions,” he said.

Education was the foundation for economic opportunity and prosperity, he said.  Knowledge and advanced skills were critical tools to enhance every country’s economic potential, growth and standard of living.  For that reason joint efforts were necessary to disseminate and maximize technological advances that would allow developing countries to progress faster towards achieving the Millennium Development Goals, particularly those relating to all levels of education, health and gender equality.  On human rights, he said that Suriname remained committed to the protection and promotion of all human rights.  He further said that the upcoming review of the Rome Statute of the International Criminal Court, to be held in Uganda next year, should seriously address the issue of the elements of the crime of aggression.