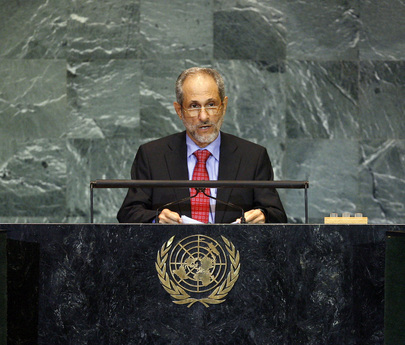 GHAZI SALAHUDDIN ATABANI, Advisor to the President of the Sudan, said millions of people were looking to the Assembly in the wake of suffocating crises, traces of which still lingered, especially amid developing countries’ dashed hopes for development and stability.  Non-compliance with international law had led to a policy of double standards on the international scene, which made the world less secure.  As Chair of the “Group of 77” developing countries and China, the Sudan had paid special attention to the global economic and financial crisis, which had created more poverty, hunger and unemployment, raised commodity prices and diverted foreign direct investment.
He said the Group was deeply concerned at its impacts on African States, least developed countries, small island States and countries emerging from conflict.  Industrialized nations had a moral duty to find solutions, notably in the areas of funding, capacity-building and elimination of barriers to trade and investment.  On reform of the global financial system, he said developing country participation in norm-setting and decision-making was of central importance, and the open-ended working group created to follow up on the outcome of the High-level Conference on the World Financial and Economic Crisis must urgently discharge its mandate.
Regarding climate change, he expressed hope that developed nations, on the basis of their historic responsibility to address the issue, would provide new and additional financial resources to help build capacities and develop technologies. Meanwhile, he said the absence of democracy in the Security Council had been a major factor in reducing the United Nations’ ability to respond to new challenges.
Indeed, he continued, unilateral sanctions hostile to trade and investment had violated international law, while a misused concept of terrorism had led to equating victims with aggressors, as was the case with the Palestinians.  Their situation had gravely compromised the United Nations’ reputation.  On the basis of the African position, he called for revitalizing the United Nations and reforming the Security Council, and more closely integrating the United Nations and regional organizations to promote development.
For its part, the Sudan had made peace a strategic goal with the signing of the Comprehensive Peace Agreement, he said, noting that the pact had established rights on the basis citizenship and outlined wealth-sharing principles in line with the norms of equity.  However, donors had not fulfilled their pledges, which reflected negatively on the agreement, especially in the area of development, rehabilitation and reintegration of former combatants.  Recalling that the Sudan would hold executive elections in April, he invited the international community to provide financial and material support to those efforts.
Expressing profound concern at recent armed tribal conflicts in southern Sudan, he said responsibility for the maintenance of peace in that region belonged to the Government of southern Sudan.  The signing the Darfur Peace Agreement in Abuja, under the aegis of the African Union, affirmed his Government’s commitment to resolving the Darfur problem.  Darfur had seen positive developments, thanks, in part, to his Government’s cooperation with the African Union-United Nations Hybrid Operation in Darfur (UNAMID) through the tripartite mechanism.  Khartoum’s signing of the humanitarian agreement with the United States Special Envoy to the Sudan further supported those efforts.
He said his Government was prepared to work at any time to ensure the success of negotiations in Doha, in the framework of the Afro-Arab Initiative and under the efforts of the joint mediator, and welcomed the United States’ readiness to help find a solution to the Darfur question.  His Government also appealed to armed groups to “muster the will for a solution”, as the Sudanese were more capable than any others of solving their problems.  He called on the global community to follow through on pledges to take stringent decisions against those who impeded peace talks.  In addition, his Government was keenly interested in having constructive relations with its neighbours and was ready to cooperate with a view to ending regional hotbeds of tension.  The Sudan wished to normalize relations with Chad, in line with all agreements signed with that country.
Indeed, the causes of conflict in Darfur were well known and seen in the paucity of resources, environmental degradation and impacts of climate change, he said.  They could be cured through development and poverty eradication, however, an unjust campaign had been undertaken against his country, which included an agenda designed to exploit the Darfur crisis and obfuscate facts.
He said the Government of National Unity had made progress in the application of the Comprehensive Peace Agreement and that the country had started a new phase of political reform, peaceful devolution of authority and work to end infighting.  The International Criminal Court’s selective targeting of the Sudanese leadership was a losing attempt to hamper the peace process and prolong suffering.  It had been condemned by regional and international organizations.  The achievement of security and stability in Darfur required those conditions to be urgently rectified.  In closing, he called for renewed resolve to foster multilateral action to address world challenges.