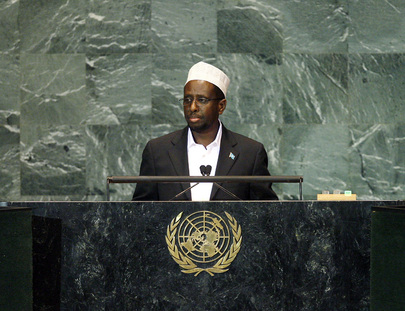 SHEIKH SHARIF SHEIKH AHMED, President of the Transitional Federal Government of Somalia, thanked all those who had promoted peace and stability in his country, as well as those that had delivered aid to protect its sovereignty and territorial integrity.  He expressed condolences to those who had lost their lives in defence of those principles.
Describing priorities of his Government, which came to power following the Djibouti Peace Process, he said it would be imperative to improve the security situation, promote reconciliation and deliver humanitarian assistance to displaced persons.  Unfortunately, rebels were working to bring down his Government and were conducting a “violent insurrection” against Transitional Authorities, which only compounded the negative effects of 18 years of violence and unemployment.
Foreign elements had joined the rebellion, he explained, some of whom had become leaders.  Reminding the Assembly that his Government had overcome an attempted coup d’état, that success had been due, in part, to efforts of the Government and people, and assistance from the global community, especially the African Union.  For its part, Somalia was working to create new naval forces, including a new Coast Guard, and to tackle piracy, which threatened shipping in the Gulf of Aden and the Indian Ocean.  However, there was still a long road to travel to that end.
In that context, he said there was a new type of rebellion under way in Somalia, one conducted by foreign extremists and which was against Islam, peace and security.  The extremists were “spoilers” who had taken advantage of the anarchy that had prevailed over the past 18 years.  The situation should not be taken lightly and the global community must take “prompt and decisive steps” to ensure that Somalis were not held hostage by those working against their destiny.  The consequences of inaction risked creating trouble in neighbouring countries.  However, he stressed that terrorism was not confined to Somalia and should be tackled at the international level.
Similarly, he said that if Somalia’s security situation remained unchanged, piracy would continue.  While that scourge had slowed, thanks to international efforts, among others, more attention was needed.  In addition, activities like illegal fishing and pillaging of national wealth not only violated Somali sovereignty but damaged the environment.
Nonetheless, he was determined to continue political dialogue among all stakeholders, including the armed rebels, and “sit at the table to negotiate” an end to conflict.  Indeed, he would spare no effort in finding a lasting solution to ensure the security of all Somali people and territory.  Though the rebels did not believe in dialogue, he was ready to lay the basis for a transparent system, notably by establishing institutions that reflected the will and cultural values of Somalis.
Such a system would be based on the protection of human rights and rule of law, and would seek to promote the genuine Islamic principles of individual freedom, respect for equity and equal rights, irrespective of gender or ethnicity.
In addition, he said the Government would work to establish an economic system, based on market economics, which would encourage foreign direct investment and individual ownership.  Institutions to combat corruption would also be created.
“At this difficult moment in history, we need assistance and support,” he said, particularly in terms of security and humanitarian aid.  It would be difficult to protect human rights without achieving security.  Outlining Somalia’s needs, he said measures should be taken to promote police services, and judicial and administrative services.  African Union troops should be increased.  The refugee situation continued to deteriorate, and more than 3.8 million people needed humanitarian assistance.
Regarding the resolution adopted by the Security Council on the arms embargo, he urged that body to reconsider that matter and help Somalia build its security forces, without which, efforts to reconstruct the country would be impossible.  He also asked donors attending the Brussels Donor Conference to make further funding available.
In closing, he expressed his firm belief that security advances would likely help counter the economic and social impacts of the “offensive” that had occurred for the last 18 years.  In that context, he called for relaunching the enterprising spirit of Somalis.  With remittances from those living abroad, tangible progress had been seen and he believed the economy could progress “reasonably” in coming years.  As the economic crisis had placed an additional burden on Somalis, there was a need for joint and urgent action for Somalia.  With international support, he was confident that Somalia could make genuine, concrete progress.